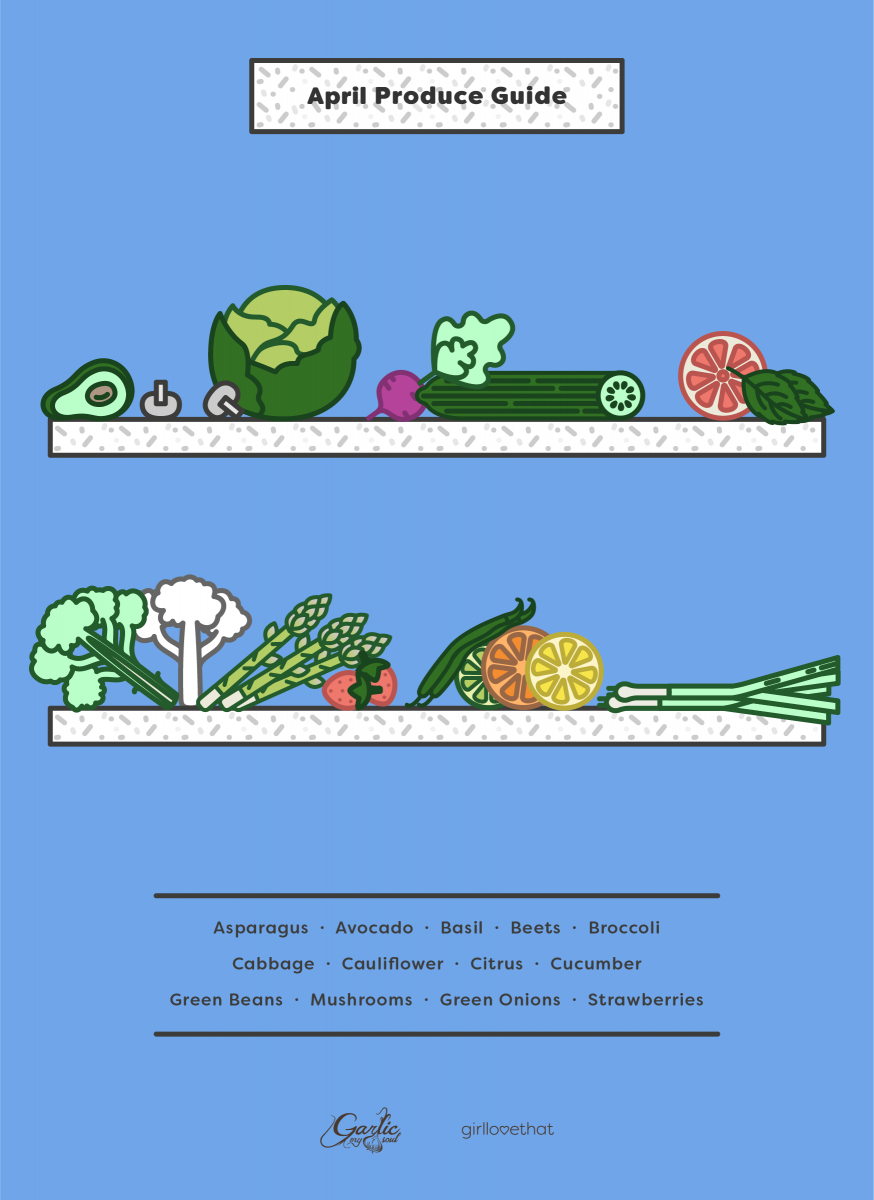 GUYS, we’re moving on up and SPRING is on it’s way. Here’s to berries to come (starting with the strawberry, love seeing the Cali grown ones around!) and the start of some great veg. Here’s our list:

And, as always, here are some of the best recipes to try: 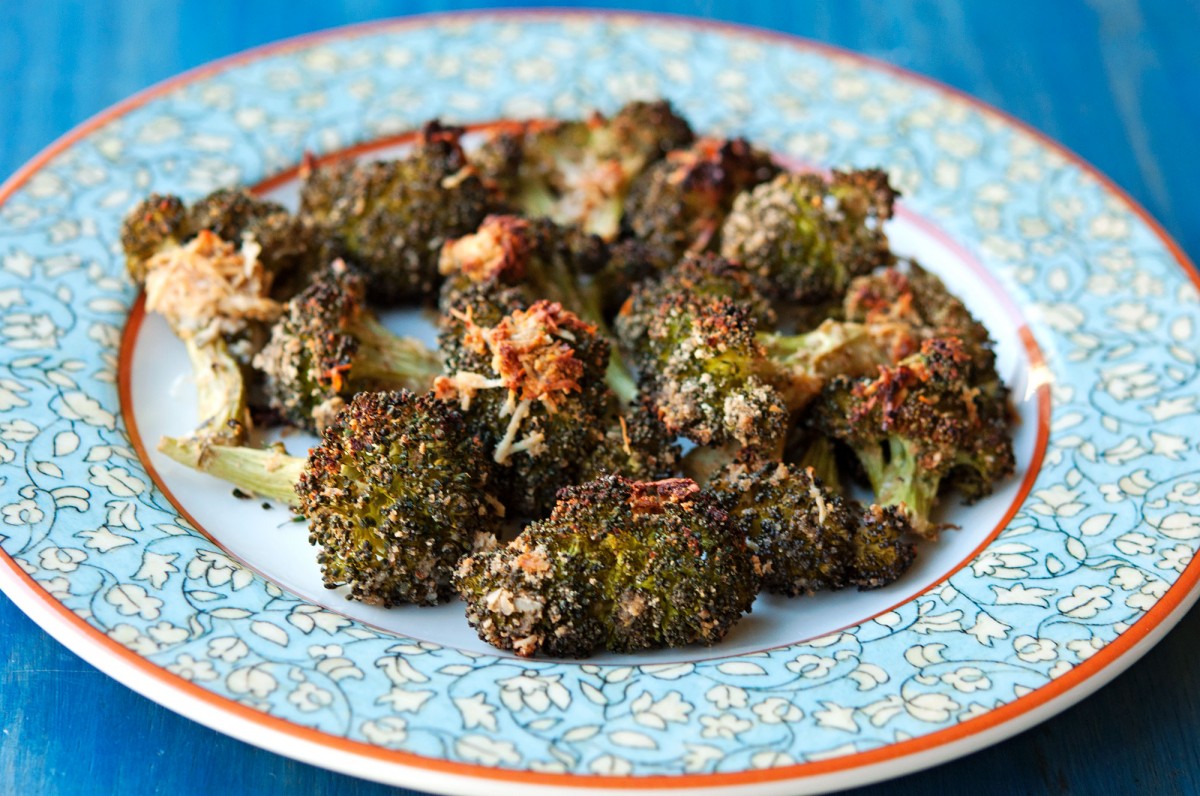 Guys, this is my fave way to make broccoli. Roasted with Lemon. Get at it. 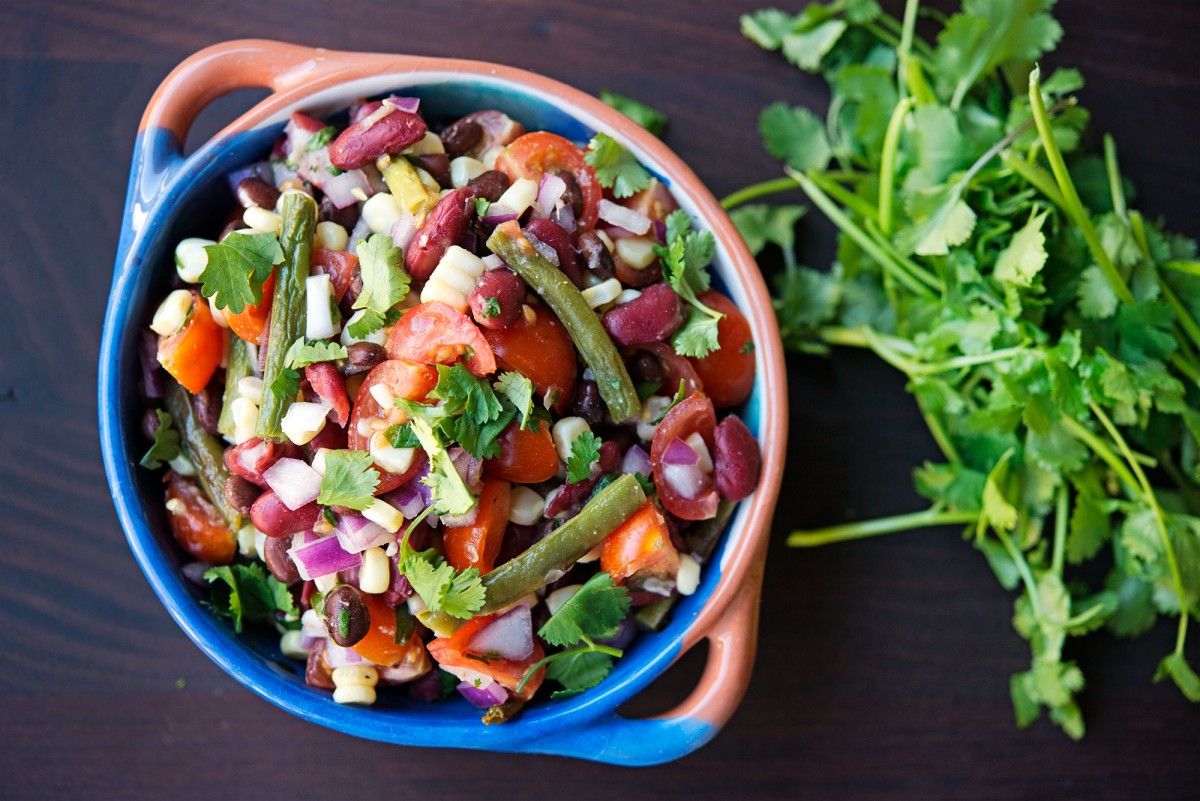 Need sides? Try this Southwestern Side Salad with green beans. It’s great with anything grilled, and I recommend chilling it for a bit before serving. It’s also great as a dip, just add a little salsa to it! 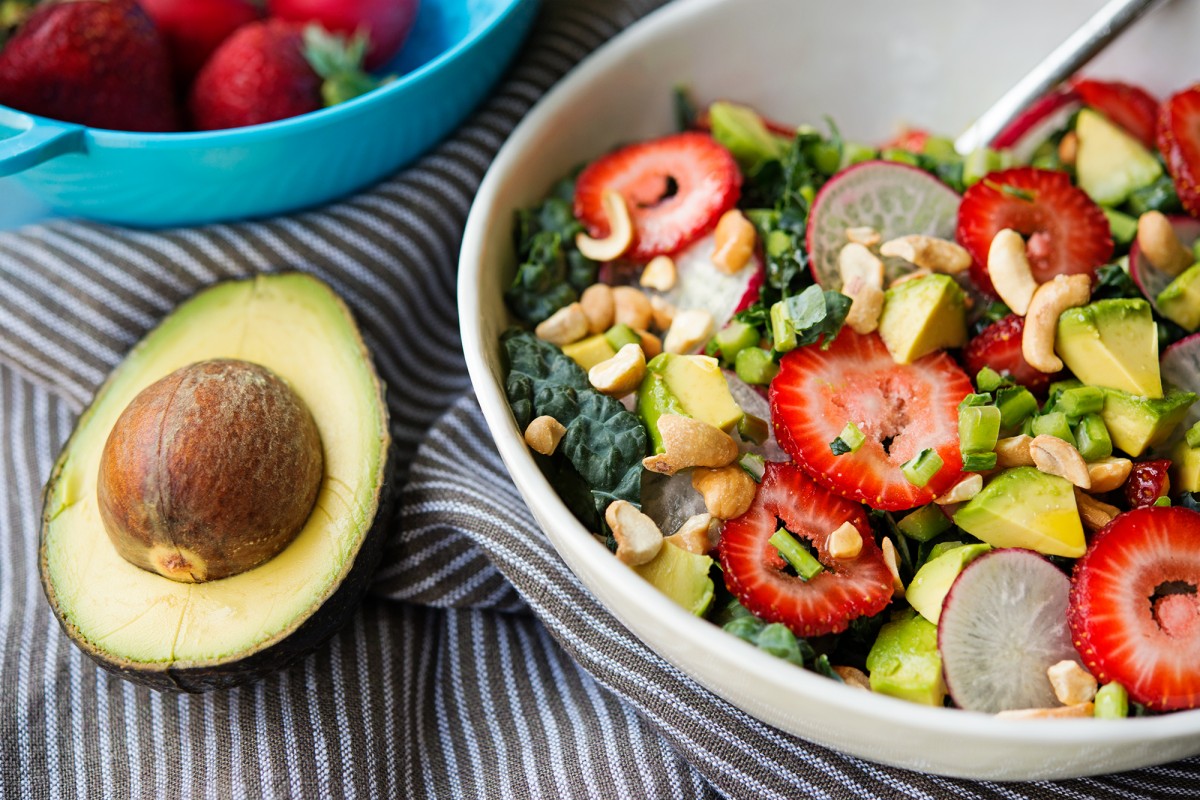 Strawberry Avocado Salad. This is an easy go-to salad for work or weekend. It’s vegetarian but go ahead and add some chicken if you want. Or serve with burrata. This is great for people like me who prefer their strawberries in things instead of out-of-hand. 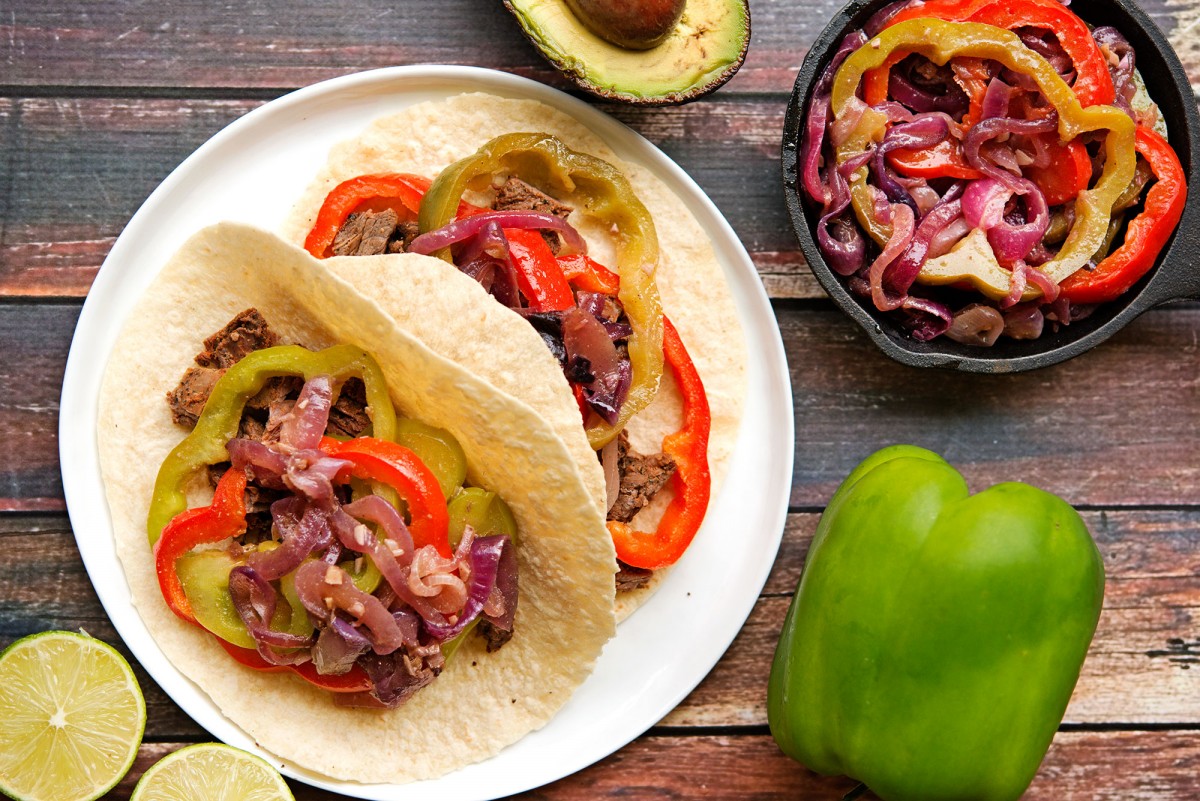 An of course, a solid fave is steak fajitas – serve with lots and lots of avocado instead of adding sour cream. Or add both, live a little.

I hope your April is going well and that you’re cookin’ up a storm! XO

I made this back in 2015, but I also needed it this weekend because it was sunny and bright and I needed to gulp down a ton of liquid but water sometimes is a little overrated. I hope you enjoy! 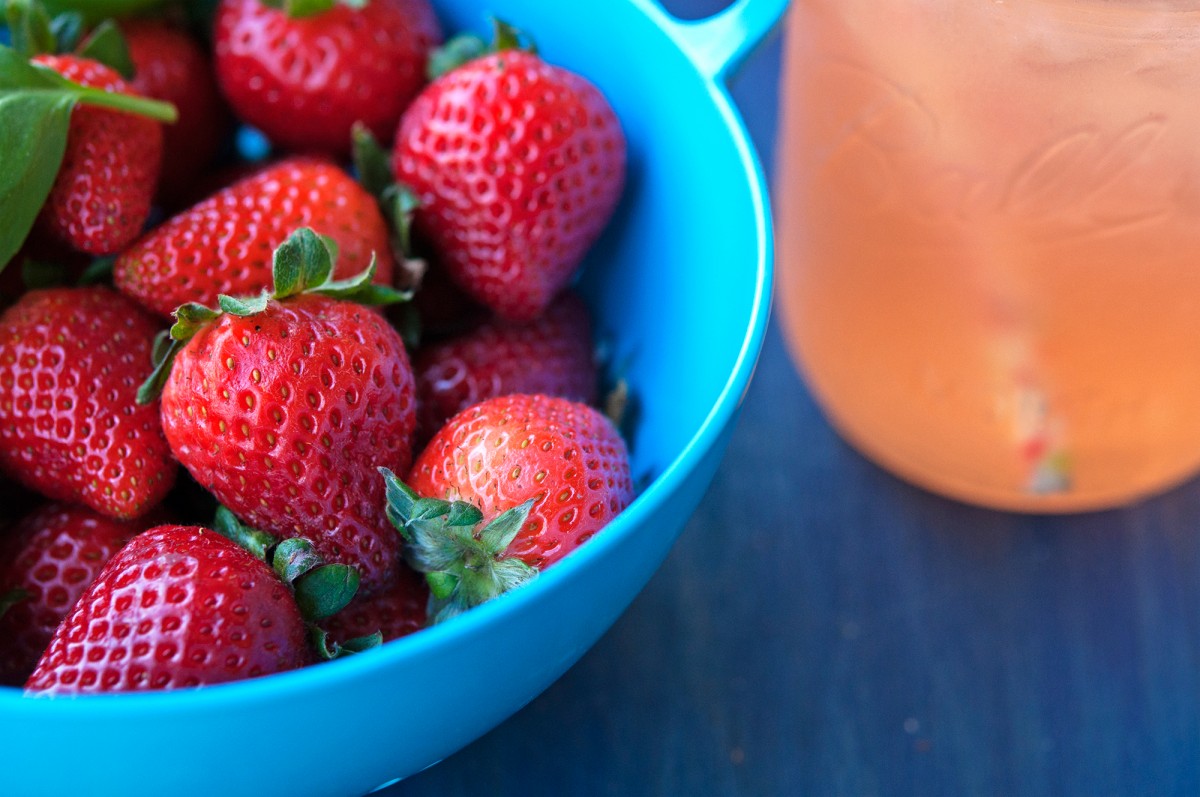 Mondays can be hard. Coming off a weekend of sunshine and great weather and hanging with friends, sitting in your office (or wherever you work!) might not seem as…well, free. This weekend I worked on some wedding stuff for my friends A and E, and I also spent some time in my kitchen whipping some new items up for you.

Now that Monday has rolled around, I wish I was back outside in the sunshine, spray painting things gold…but a glass of strawberry lemonade someone makes the world seems a little brighter, like I am still sitting outside making my Pinterest dreams come true. 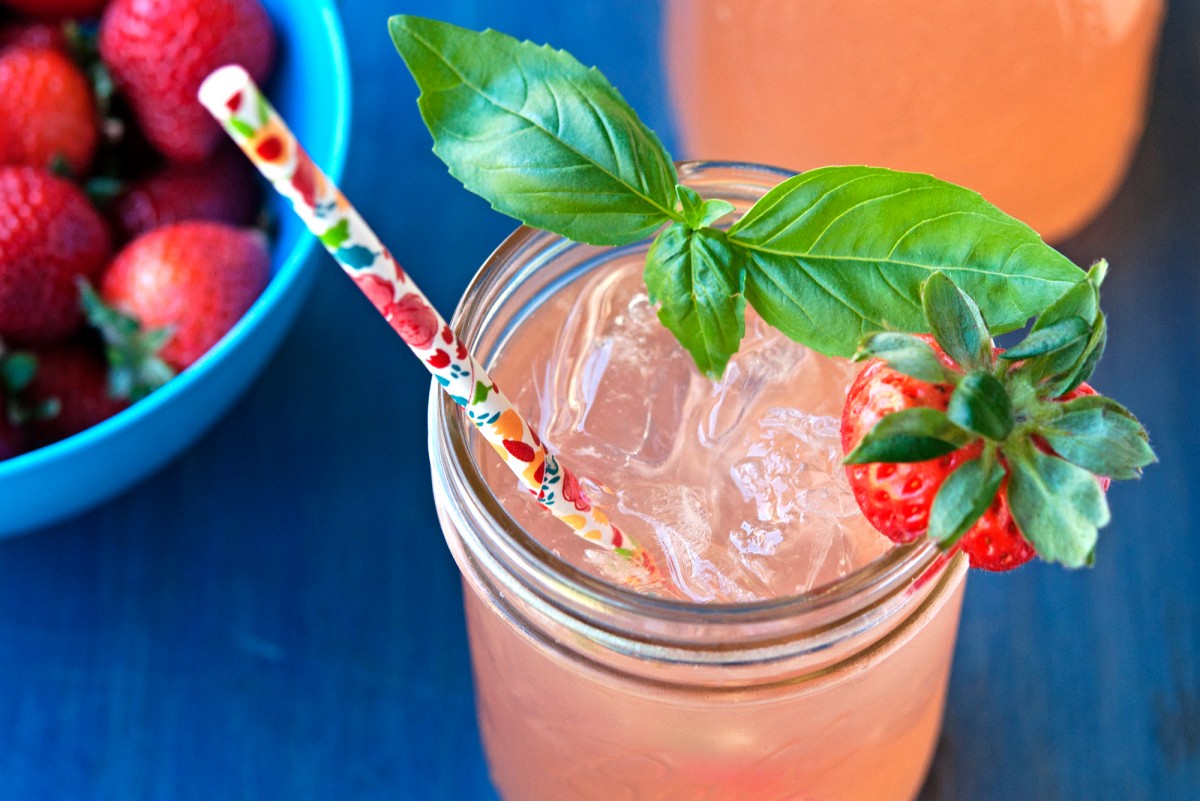 I don’t often drink sweet drinks, but something about strawberries makes me want to sip ice cold glasses of lemonade and dream of long summer evenings.

This recipe is pretty similar to my Rosemary Blueberry Lemonade, but you know, with strawberries and basil. The point is this: get an herb you like, and a berry you like, and you’re on your way to a drink that’ll make Mondays seem like the new Thursday (even I can’t make Monday a Friday. 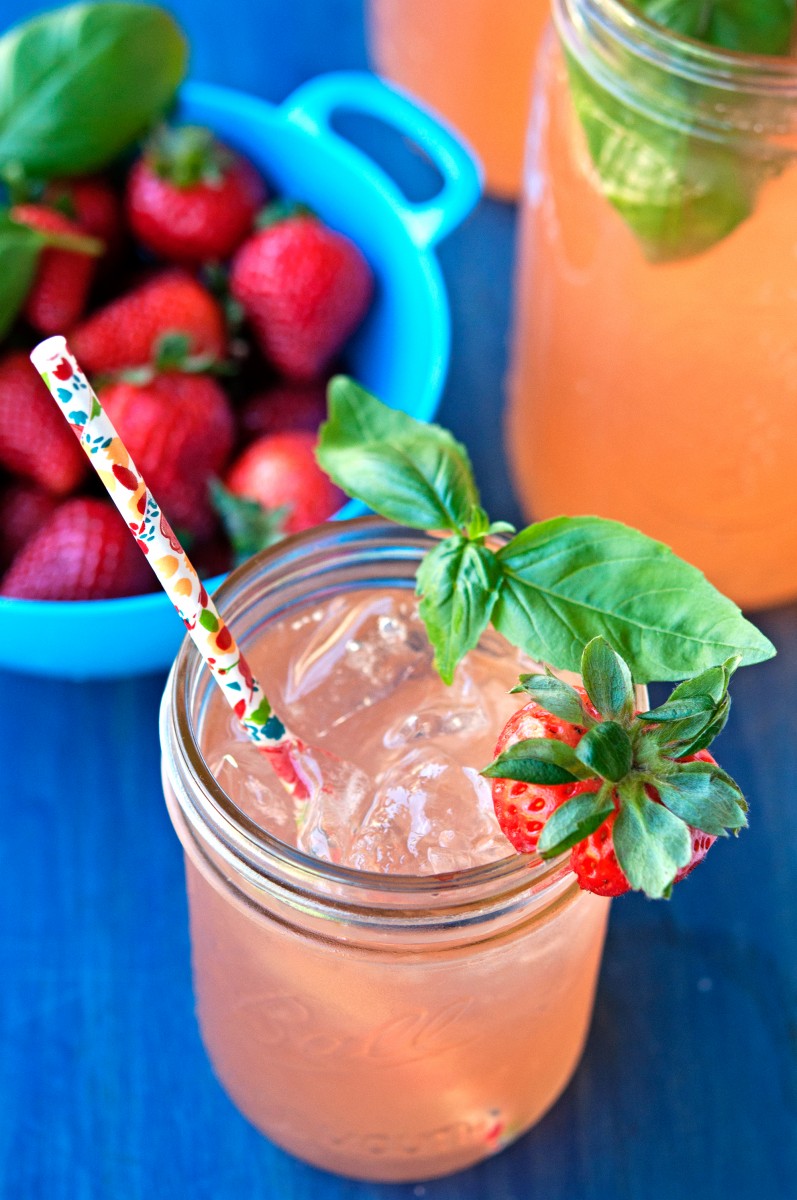 1. Mix the sugar with one cup of water over medium heat. Once all the sugar is dissolved, add your basil leaves and turn off heat.
2. While your basil simple syrup is melding, prepare a pitcher with a handful or two of berries, and lots of ice.
3. Freshly squeeze lemons to get about one cup of lemon juice. I used about eight lemons, but honestly this can vary depending on the size and juiciness of your lemons. The good news is you can never have too many lemons, so just grab a bag and you’ll be OK.
4. Put your lemon juice in the pitcher. Remove the basil leaves and add your simple syrup to your pitcher. Now, add water to taste – keep in mind that the ice will dilute the drink, too! 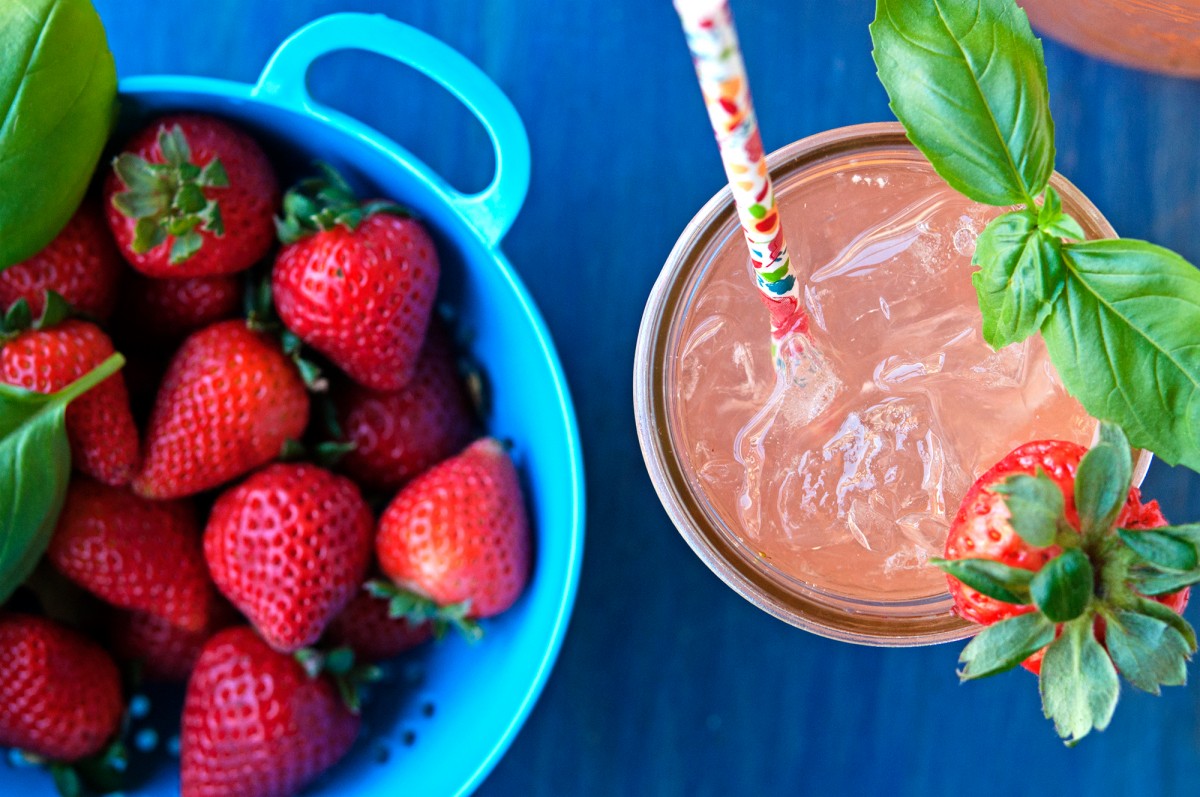 Happy Monday, y’all. Let us know what you do on Mondays to make them a little shinier – we’re all in this together, after all.

April! Springtime! Wahoo! We love April in Los Angeles because things are waking up – the birds, the trees, the cacti (ok maybe they were already awake) and the sun is shining for more and more hours each day. April means May and SUMMER are just around the corner, and we’re starting to think about sundresses, sandals, and beach days. With that comes this sunny desktop calendar celebrating peas, my fave fall veggie, and a great recipe for Shells with Ricotta and Peas that I need to make ASAP. (PSST….here is the Tablet Version, and here is a horizontal iPhone version!) 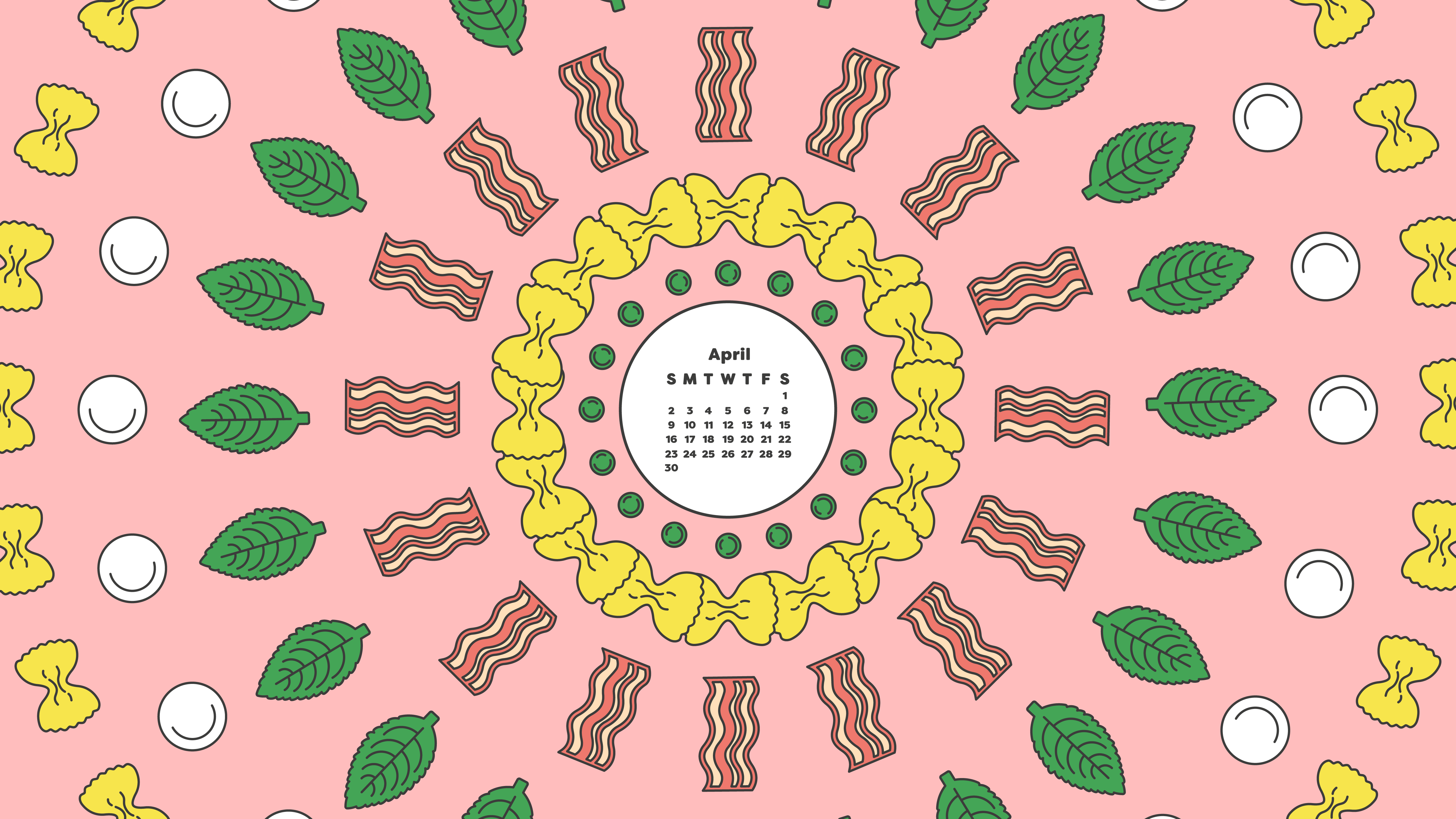 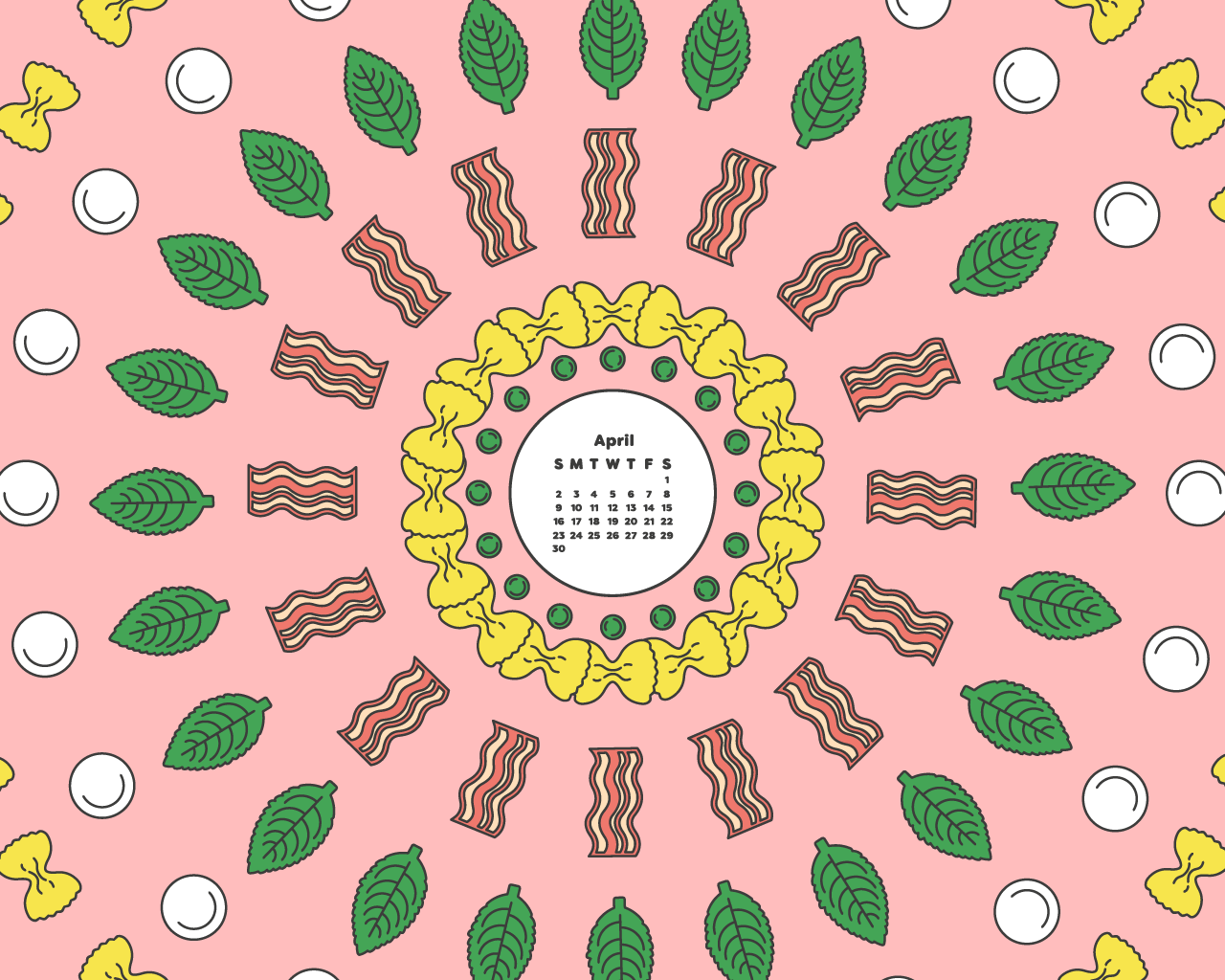 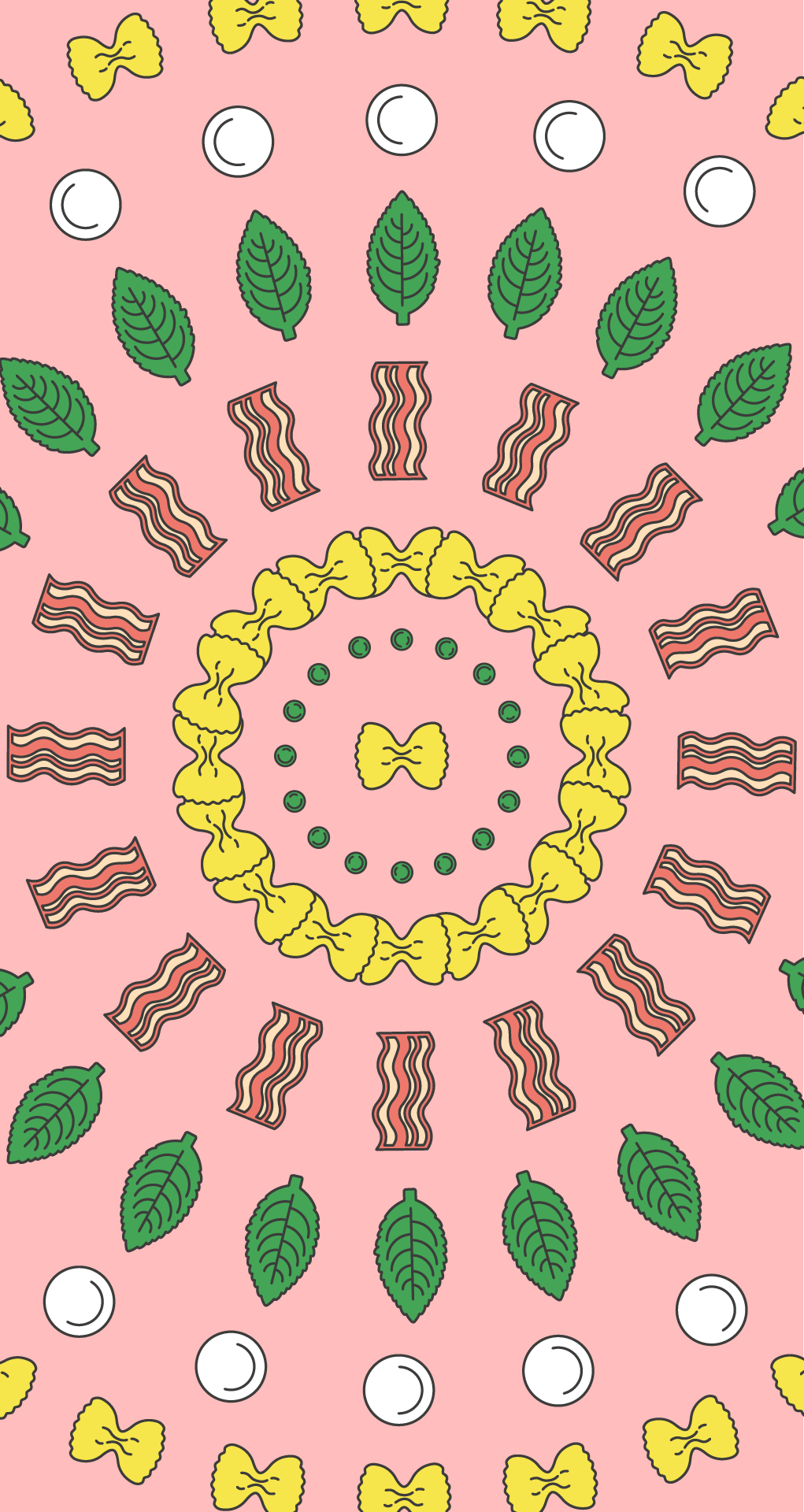 I made this back in 2013. The photos are horrible, I’m so sorry. I am bringing it back because y’all said you could use more easy dinners in your life. I am a helper. This is quick. It’s delicious. It’s full of veggies. But also chicken, because #protein. And, this was hilarious to read because you guys, I still eat chicken tacos like once a week. Whatever. I can’t change. I won’t! #chickentacosforever 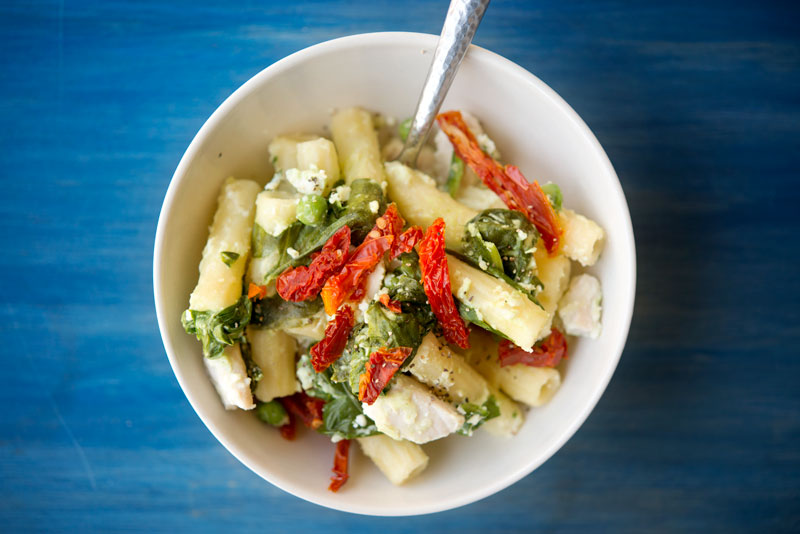 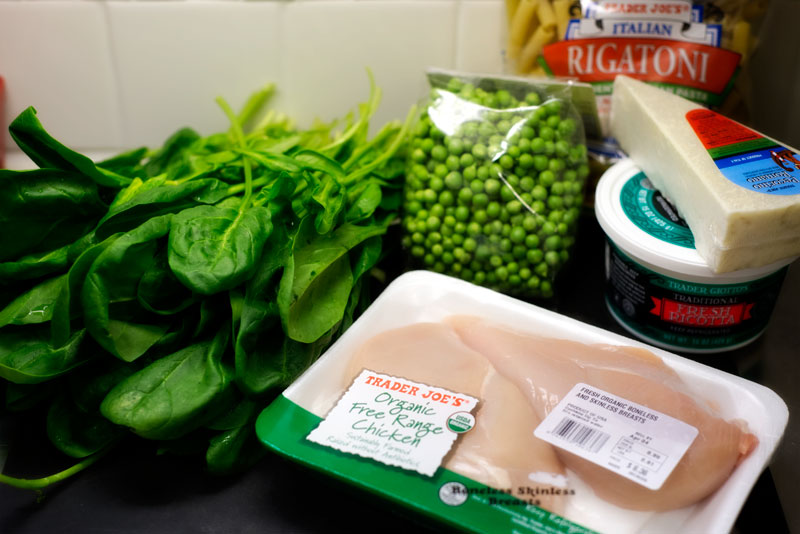 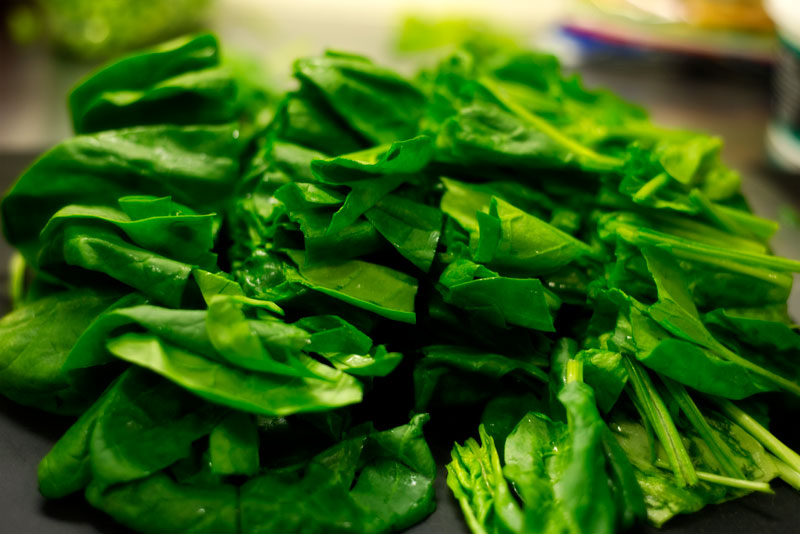 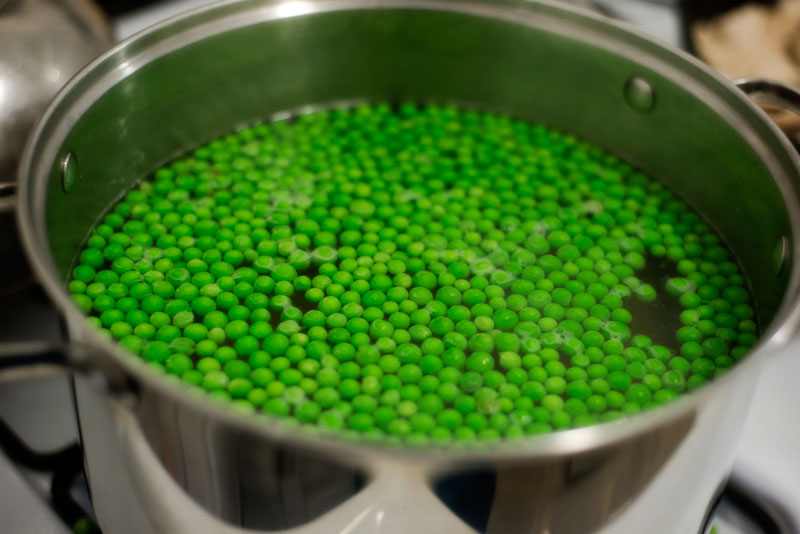 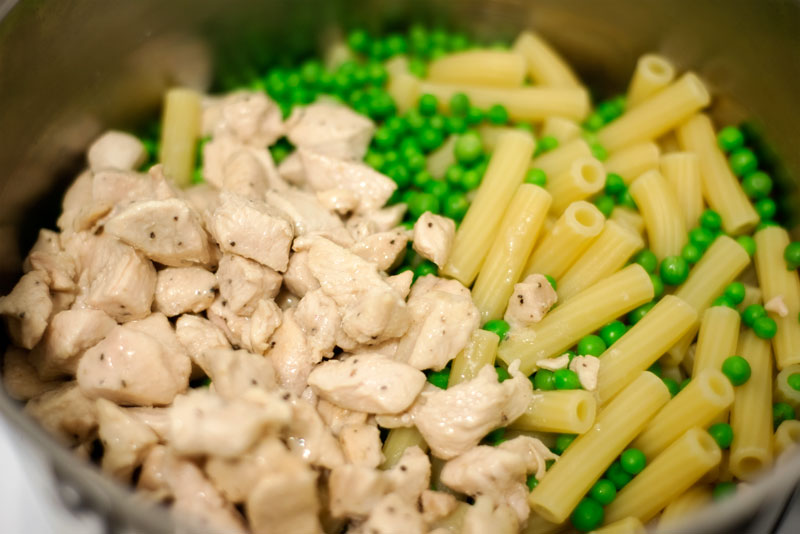 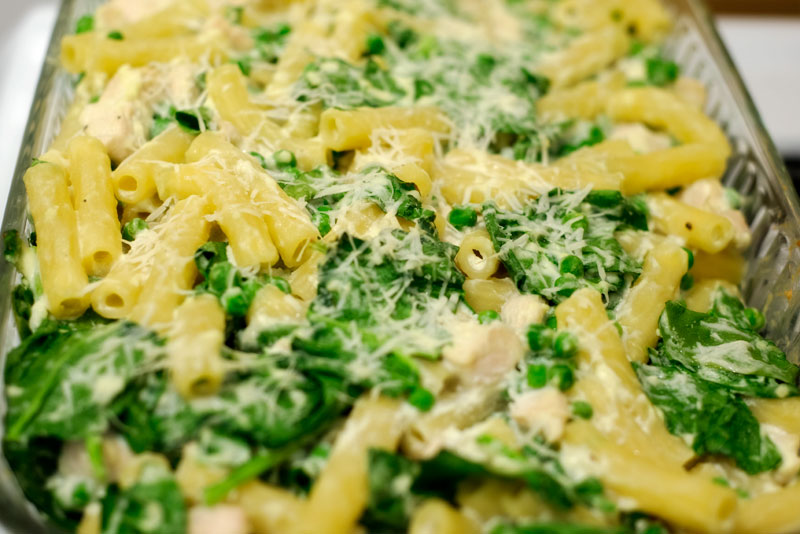 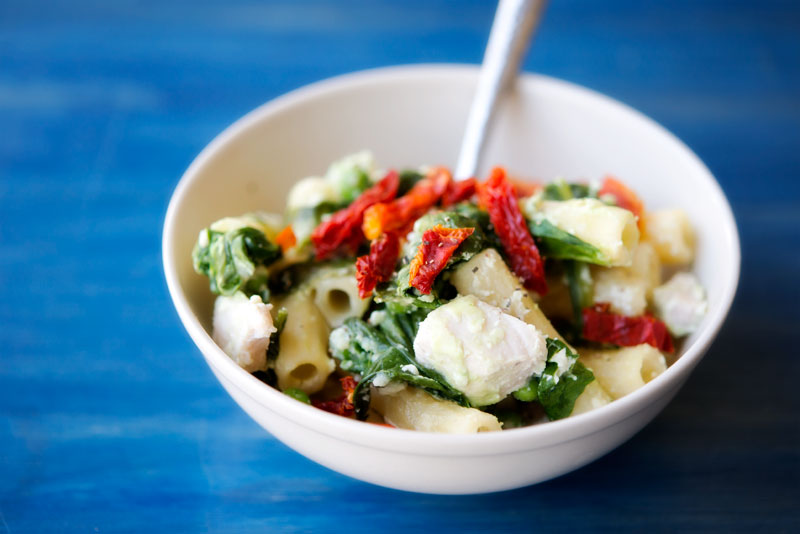 I made this falafel salad in the spring of 2015, and it’s high time I bring it back. I recommend making Mark Bittman’s baked falafel because is is divine. Otherwise, you can get it at your local mediterranean restaurant or I hear Trader Joe’s isn’t so bad. 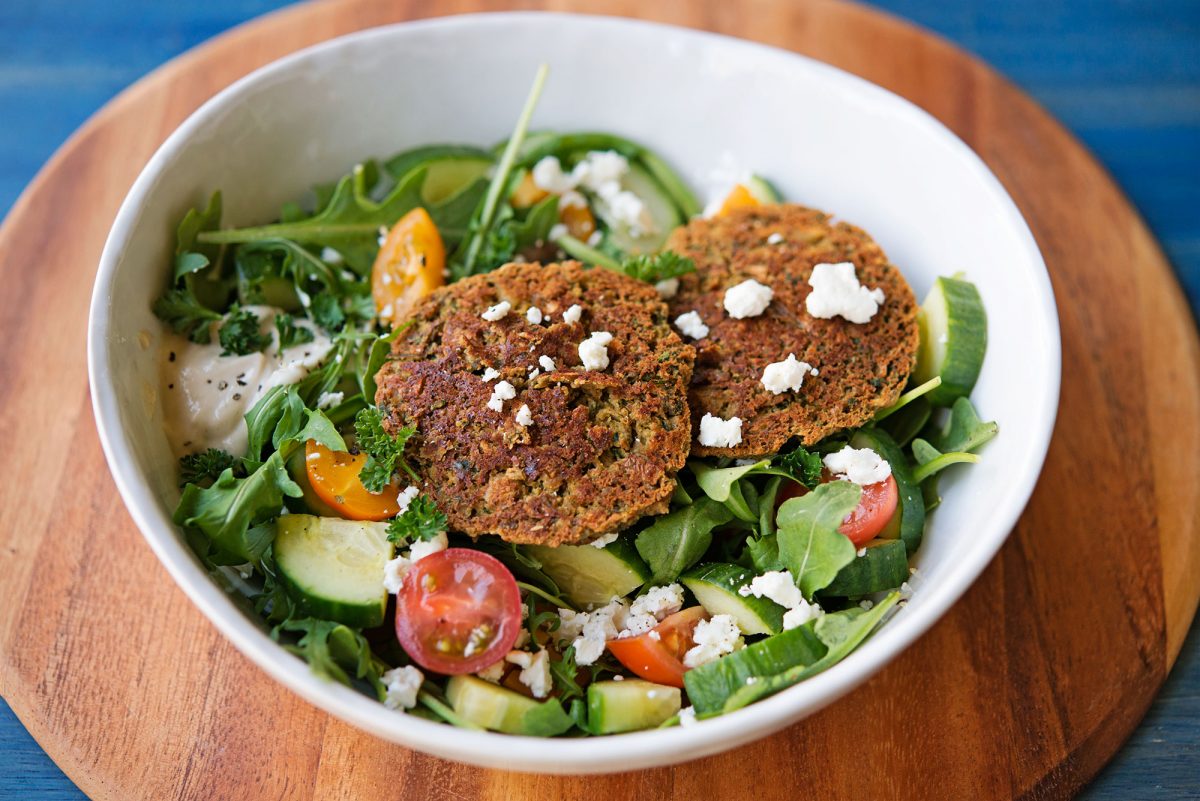 I love falafel and am constantly looking for an excuse to eat it, but I don’t love that it can leave me feeling heavy when it’s fried. The best falafel I ever had was at this place called Cafe Zog in Providence, Rhode Island with my friend Lauren (circa what, 2001, maybe?)

I recently saw Lauren and it reminded me of our adventures in Providence, and of my love for falafel. So I made some falafel baked in the oven instead of deep fried, and I threw it on a salad. I think this is a great compromise for those of us who love the flavor but don’t want to make something chocked full of healthy ingredients bad for us. 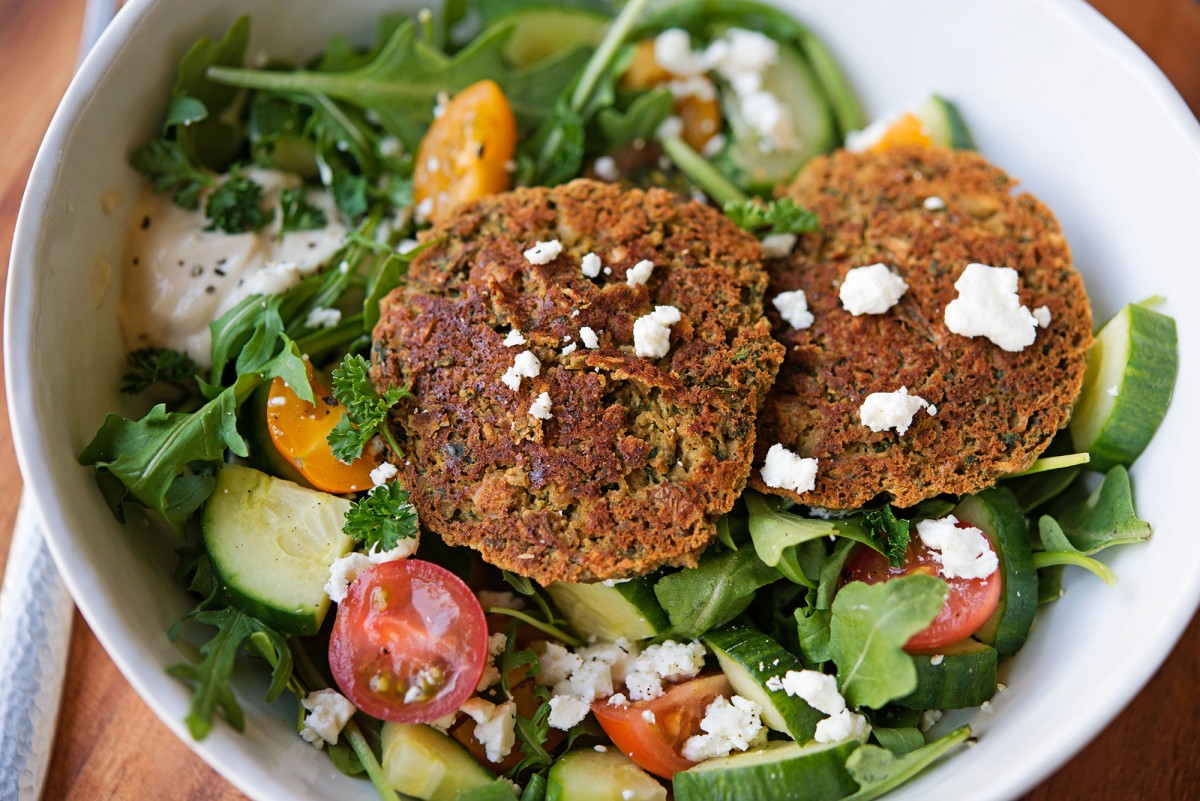 I love Mark Bittman, and his recipe really impressed me. If you plan on using canned chick peas (I did!) use two cans instead of one, and know that it might be a bit wet – you might need to not add any water, and your patties will be slightly flatter, but I can tell you they were delicious despite this.

I also just found tahini at Trader Joe’s as a dip, so I used that in this recipe and in this salad, and I wasn’t disappointed.

1. Make your falafel according to Mark’s directions.
2. Chop cumber, halve tomatoes, crumble feta.
3. Add arugula, cucumber, tomatoes, and feta to a bowl, and top with falafel (crumble this in if you’d like, or leave in patties.)
4. Add tahini on the side, and salt and pepper as you see fit. 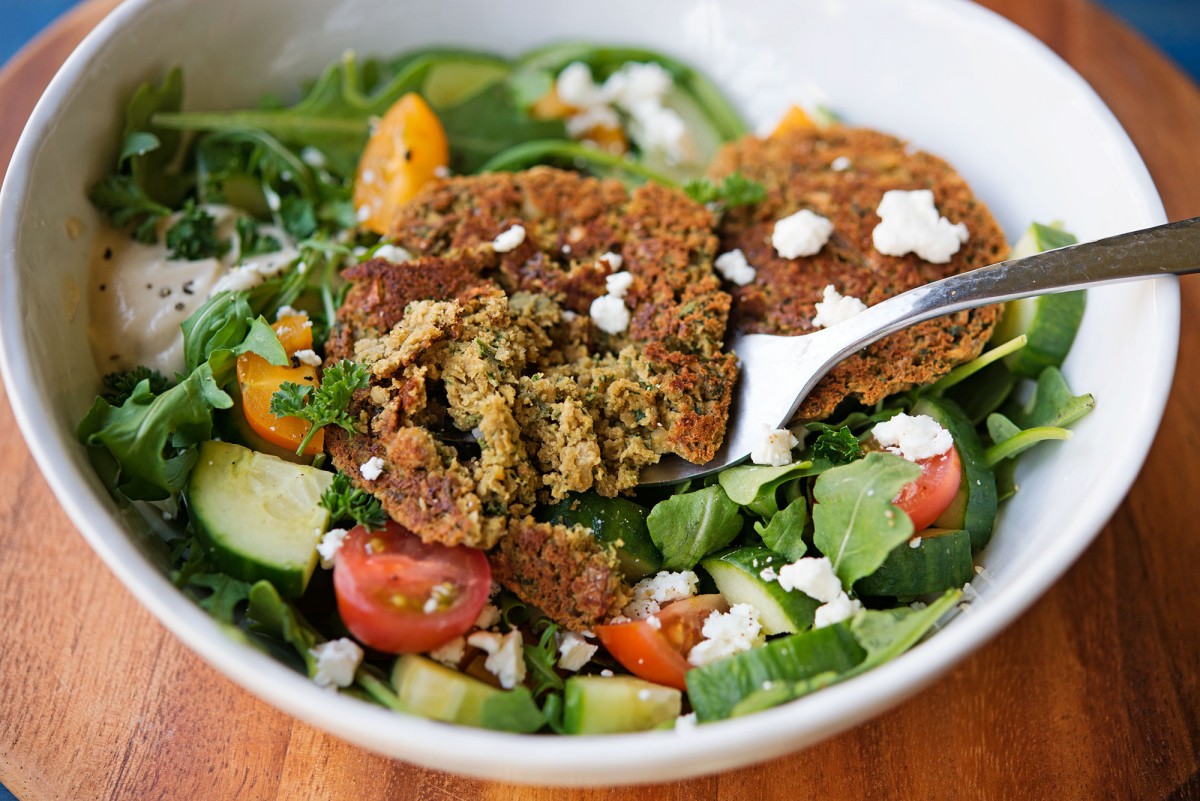 What do you think of falafel? Do you love it? Have you tried it?