Posted on August 9 2012 by fratellospirito

I have to start by saying that I love a good cut of red meat. I tried my hand at making a beef brisket only a few months ago and have been refining the way I like to do it ever since. I spent a large portion of that time trying to figure out how I could incorporate some sort of alcohol into the dish and finally landed on beer. While this meal is a bit more time consuming than previous recipes I have posted, it’s still very simple, and the results are wonderful!

Oven Temperature: 350 for the first hour & 300 for the subsequent 3 hours
Servings: 4-6 (But it is great for leftovers if you have a smaller group)

First thing you want to do is to trim the fat off of the beef brisket you have purchased. There tends to be a great deal on the bottom of the cut, and while you will want some fat for the cooking process, you don’t want too much so it doesn’t overwhelm the beer or the dry rub that is to be used. 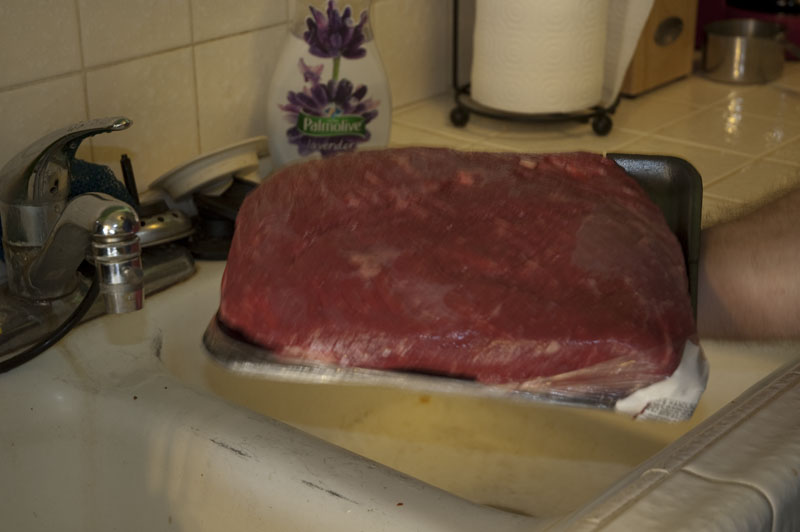 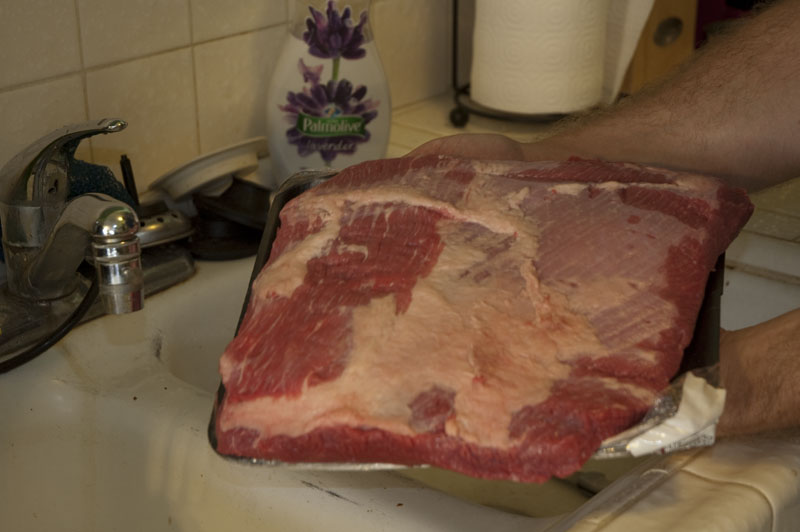 After you have trimmed the majority of the fat off the meat go ahead and put the meat in a cooking tray or pot that is large enough so the entire cut can be laid down flat. Lay it down and pour ½ a pint of the beer you have selected. For something like this I like to use Guinness, because it is an extra heavy stout and soaks up beautifully into the meat. 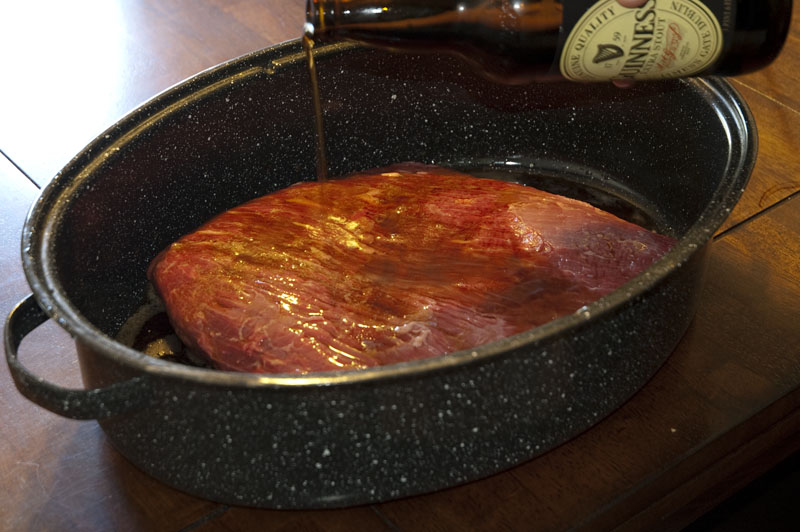 Let this cut of meat and the beer sit in the covered container for at least 2 hours. I like to keep the cut in room temperature during this time because I have found it allows for better soaking of the beer than sticking it in the fridge. Make sure you cover it though; you don’t want any bugs or dust getting in there while it sits.

The next step is to prep your rub. I like to get a large baking sheet out and pour all the ingredients for the rub onto it. This will include everything but the beef, the beer, the broth, and the olive oil. Once you have all the spices on the tray go ahead and use your hands to mix it all up. You want to make sure you get an even allotment so it spreads evenly on the meat. 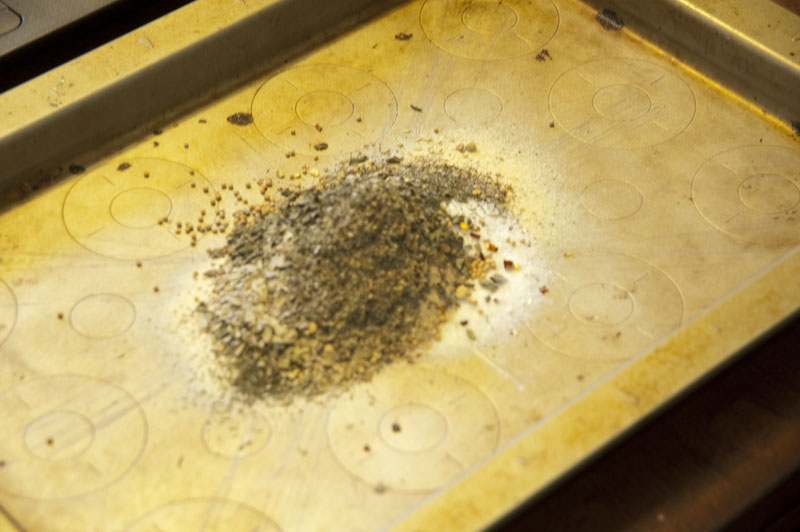 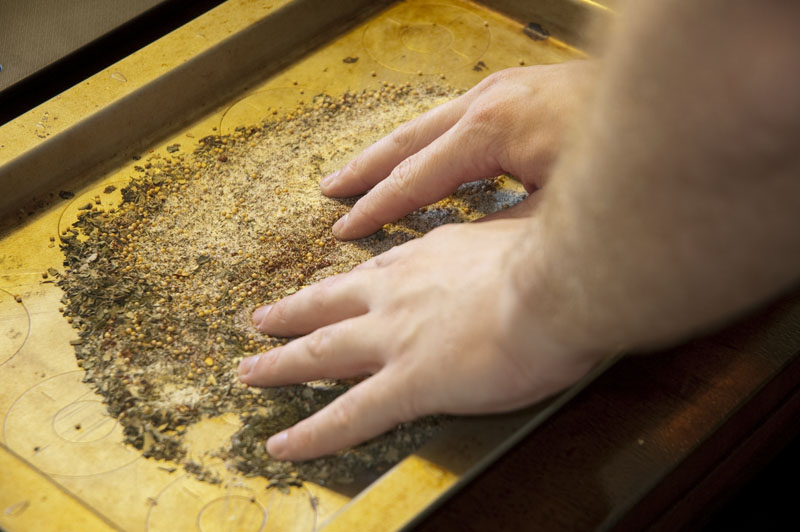 Next step is to remove the remaining beer that is soaking in the tray with your meat. Do not discard the liquid because you will need it again later in the process – put it in a bowl. After you have removed the liquid take the cut of meat out and put it on the dry rub tray. Make sure you coat the cut of meat as thoroughly as possible, covering all sides with the rub as best you can. This will do two things: first, it will ensure the flavor remains even and second, it will act as a sort of shell around the meat so the beer doesn’t escape as easily. It almost nestles it in there. 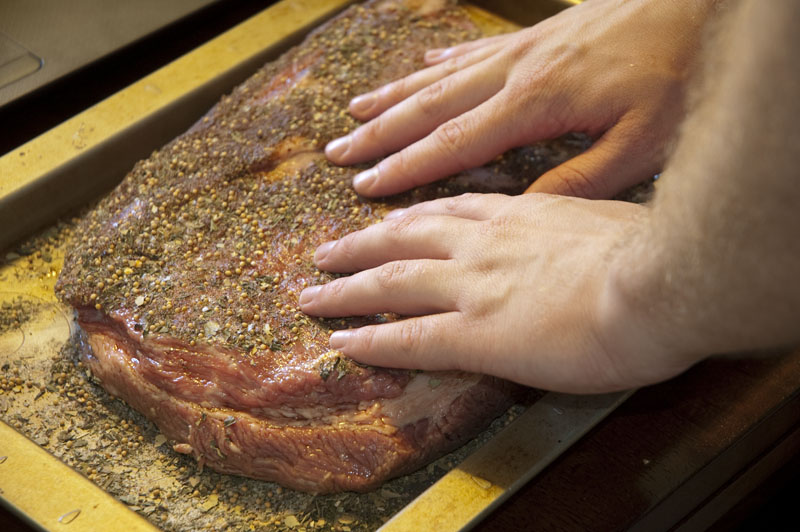 After you have finished applying the dry rub to your meat go ahead and pre-heat your oven to 350 degrees. While the oven heats up get your pot that was used to soak the beer into the meat and pour in the olive oil. This will assist you in ensuring the meat doesn’t burn during its first hour of cooking. After you have added the olive oil and generously spread it around the pan, grab your coated piece of meat put it back into your pot. Make sure you put the fatter side on the bottom, because that can be trimmed off later. 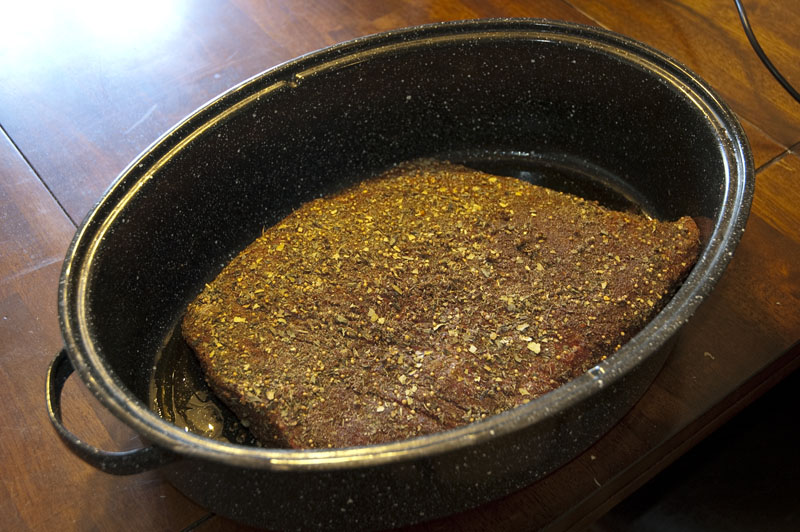 Put the pot in the oven for 1 hour uncovered and let the meat sit. In order to allow even cooking, turn the pot 180 degrees at the half hour mark.

After an hour ,remove the pot from the oven.

Lower the temperature to 300 degrees and pour the beef broth and the leftover beer you have saved into the pot. Then you want to cover the pot tightly and allow the meat to simply sit for the next 3 hours. 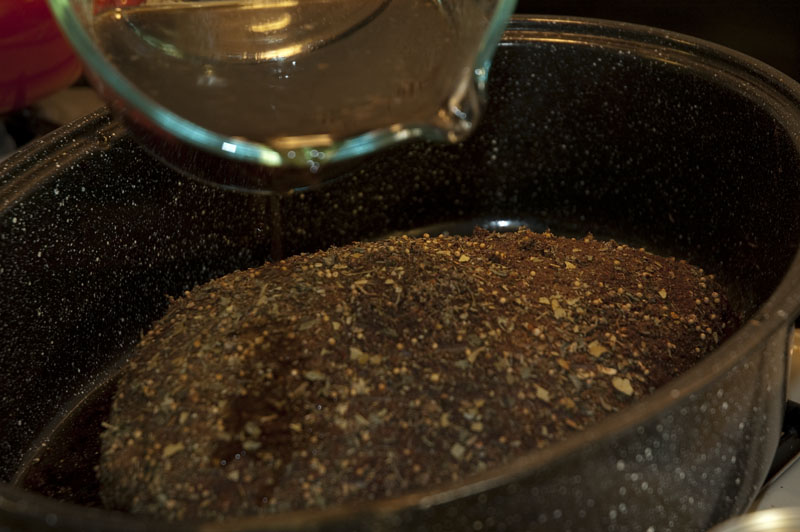 At the 3 hour mark check your meat. If it is fork tender you are ready to go.

Trim any excess fat if you would like, slice and serve. 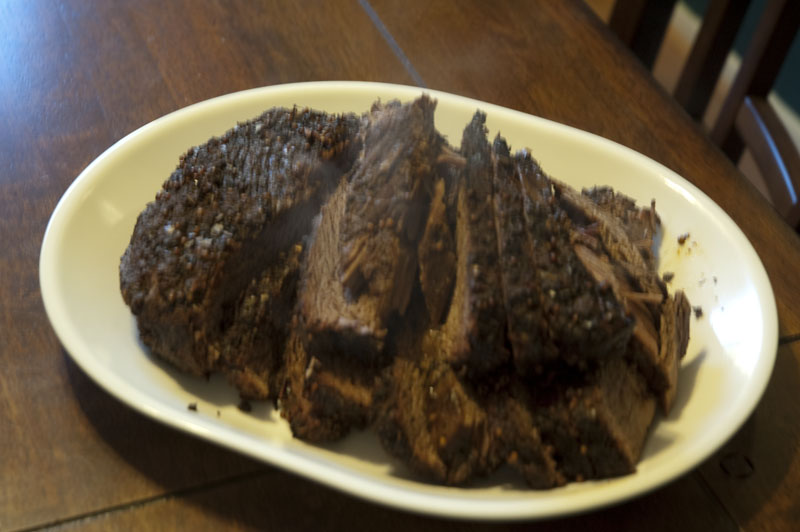 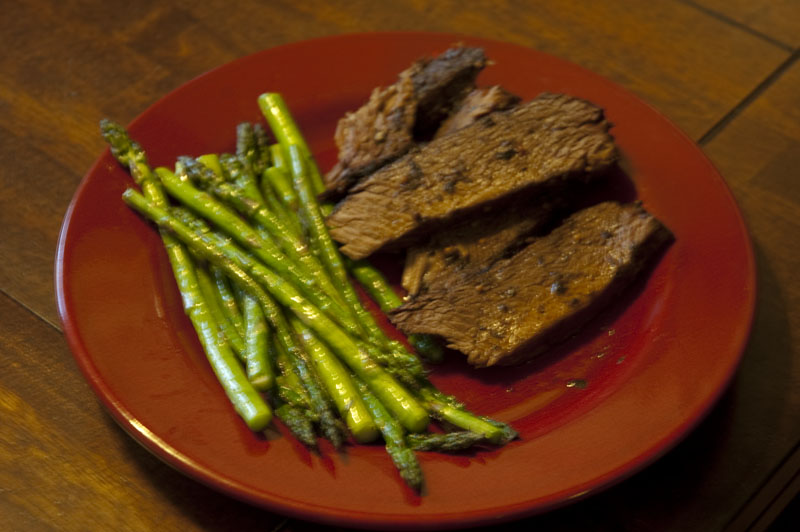