We’ve made it to the end of another Whole30! I can’t believe it, and yet this one I REALLY STRUGGLED THROUGH. I think it was a combination of eating whatever I wanted for the past year (what what preggo!) and also being all the time because a) nursing and b) not sleeping. When I don’t sleep I get REAL snacky, and I haven’t slept through the night since Evie was born in September, so it’s been A THING.

The last week I’ve been in Chicago, where my sister and her family were also doing Whole30, so I had someone around to help me not quit. I wasn’t even craving specific things, so much, as I just wanted choices. Plus, I flew twice with Evie by myself (she was a dream baby because she’s just like that) and there was nothing to eat in the airport. A lot of the feeling around it is “I deserve XYZ” for some first-world reason – because I flew alone with an infant, because I have an infant, because I did yoga, yadda yadda yadda. But nourishing my body (I kind of hate the word nourishing, anyone else?) with REAL food is obviously going to make a better impression than just eating M&Ms on a plane to make myself happy for 30 seconds.

Some things we ate in the last 10 days worth noting:

Egg Roll in a Bowl – Holy cow, this was amazing. I could add this to my regular rotation REAL easily. 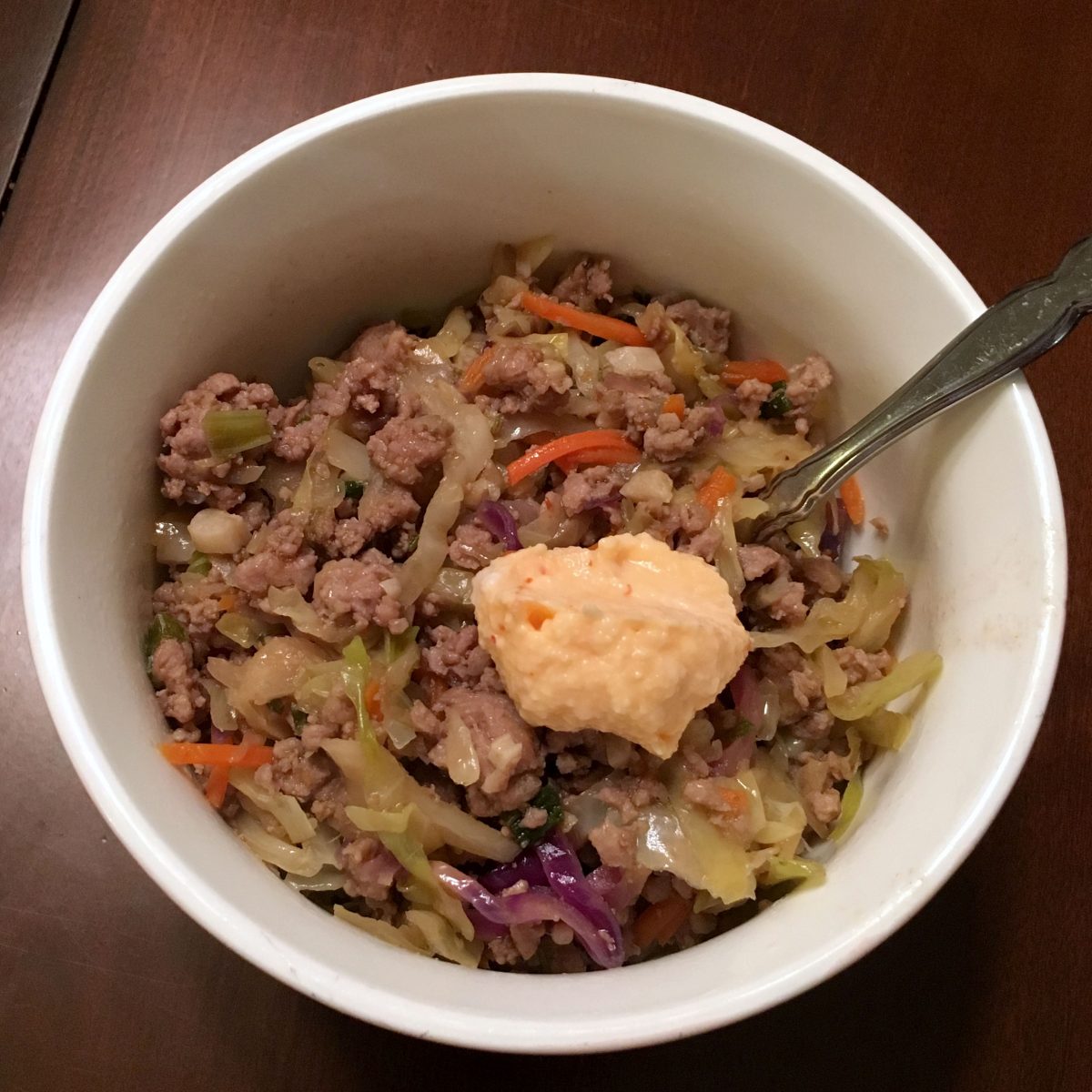 Chicken Cacciatore – This is a similar recipe, but my mom added potatoes and used tapioca flour instead of regular flour, etc. Simple, easy. 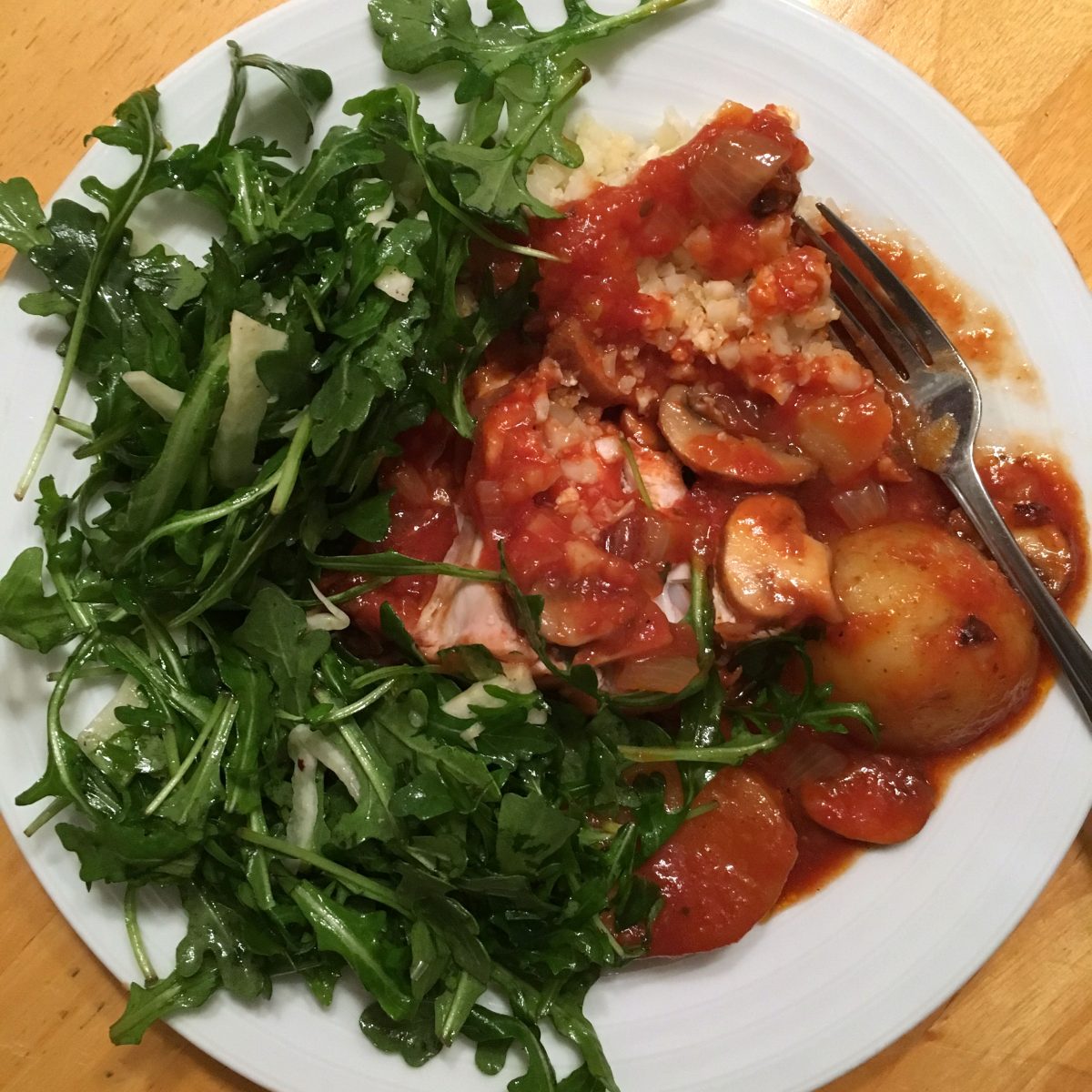 I re-read my wrap up from 2017, and have to say, this time around I also never felt this so-called “tiger blood.” Now, last year I was pregnant for most of Whole30, and didn’t know it, so I attributed it to that. This year, I am nursing and have a 4 month old babe, so you know, also could be that. I feel PRETTY GOOD, but my stomach just can’t handle this diet. That is, it’s just too much roughage. I need some blander foods to balance it out. I would probably be good if I can figure out which foods are easier on the stomach while still keeping up the fiber.

Now, last year I lost 9 pounds, which was a good start to a year of weight gain while growing Evie! I gained 35 pounds when I was pregnant, and lost the first 10 quite quickly after she was born (as one does) but obviously losing weight wasn’t my focus. So seeing the scale slide down 13 pounds this time around was encouraging. And, now I only have to lose another 12 pounds to be my pre-pregnancy weight, which is encouraging. The doctors have a saying “9 months on, 9 months off” so to be 4 months postpartum and already at 23 pounds lost is great – I am feeling more and more like me every day.

I also did a 30 day yoga challenge this January, so my body is feeling strong, and toned, and getting me back to a place of feeling in charge of my mind, and body, and emotions – important because I’m still feeling hormonal and oh-so-tired because we have a tiny babe sharing our room!

Jeff ALSO lost 13 pounds this Whole30, so he’s very into keeping this up – he keeps chanting Whole60. So we’re going to try to keep it health(ier) as we move forward. I went to Trader Joe’s today and ultimately didn’t get much because everything has so much sugar! Plus, one of my goals for the year is less food waste – we spent WAY too much money on groceries last month. So, I am hoping to get at what’s in my pantry (channeling my sister) and use up random dried fruit, nuts and seeds, etc., first, before filling it up with crackers and a bunch of other foods that look healthy but aren’t.

A friend sent me an article about the Mediterranean diet, and I think that’s what I’m going to aim for post-Whole30. Whole grains, legumes come back in, as well as keeping up my fair share of nuts and seeds and of course, fruits and veggies. Then, adding in more seafood (holla this is always my fave thing) and of course bringing dairy back in. This is something that’ll help me combat my annoyance at Whole30 for usually ending up eating SO MUCH MEAT. It’s just too much. It’s not good for the environment, but it’s hard to eat Whole30 and also get enough protein unless you eat all the nuts and all the eggs. It would be something I’d be better at if I was going to stay on this diet forever…but I’m not.

Today, I had legumes (falafel kale salad for lunch) and grains/dairy (tortilla and sour cream at dinner) but in small amounts. I kept lots of veggies, fruits, and nuts/seeds in. I didn’t binge on chocolate. I want to keep it easy. I know my body fairly well, and I know what sets me off, so I’m trying to curb cravings with my usuals – lots of water, tea, and keeping myself full so I don’t get too hungry and eat crazy amounts of sugar (I can be quite a sugar monster.)

What about you guys? Are you eating Whole30? Some other diet? How are you feeling?