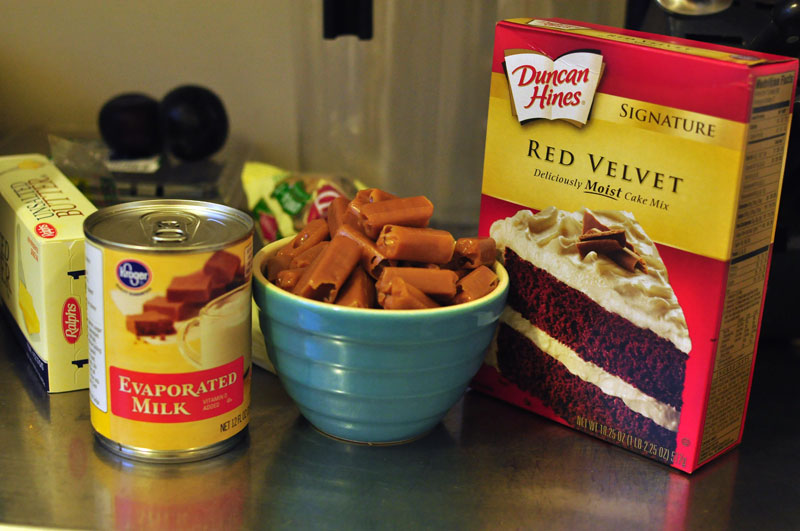 Last week I used a few new ingredients in a recipe from the PW. I couldn’t believe I had never used evaporated milk before (unless I had during the PW Challenge of 2010 and blocked it from my memory) and I had also never truly worked with caramel. Luckily, PW puts those together in her Knock You Naked Brownies, and so now, I have expanded my ingredient wheelhouse. 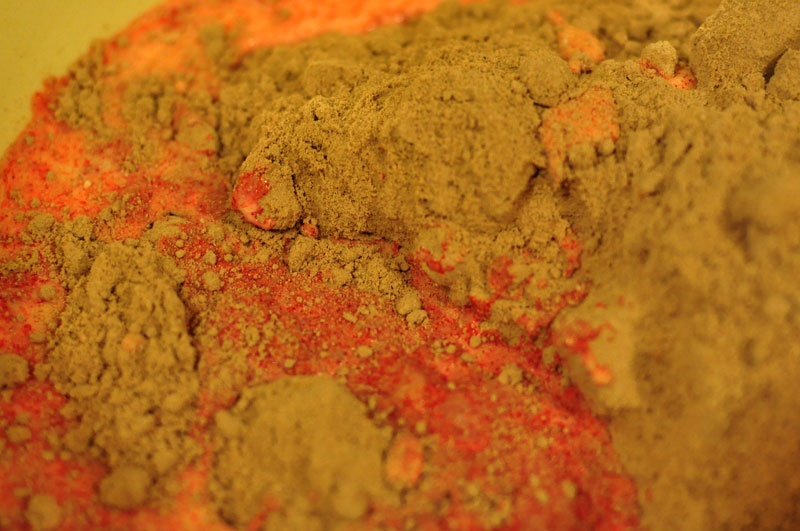 This is cake, and evaporated milk. 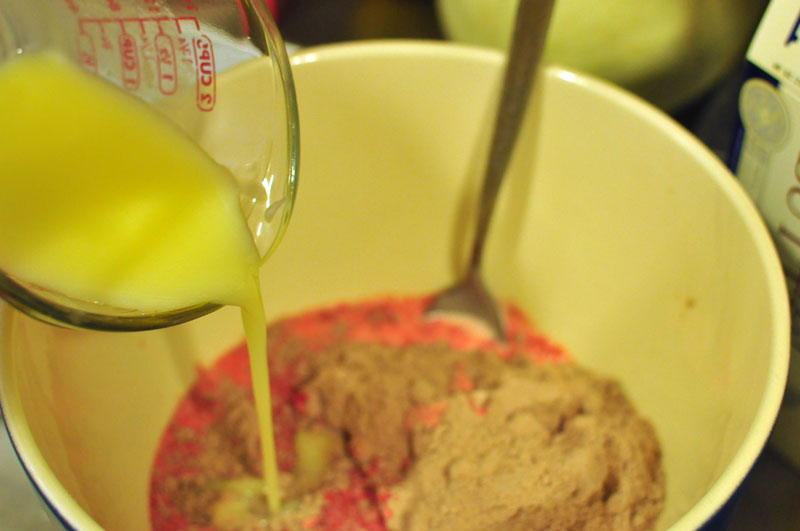 This is me adding butter. Sinful, right? 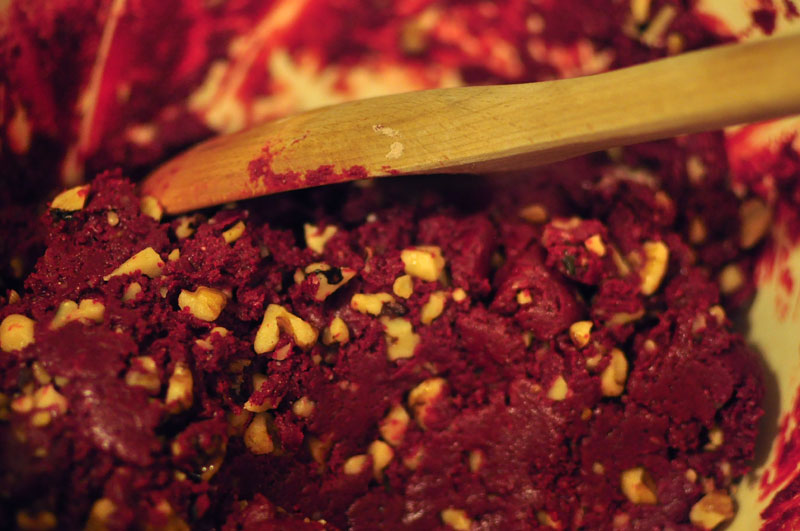 Also, nuts. I used walnuts because the person I was making it for (Hi, Joan!) doesn’t like pecans, so walnuts we went with. 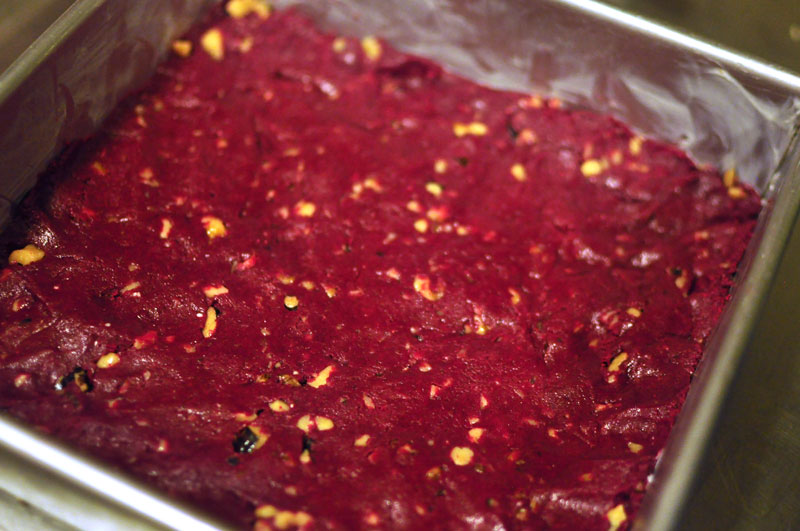 This is half of the batter, pressed into a greased 8 by 8 brownie pan. Delicious. Stick that in the oven for ten minutes, or so. 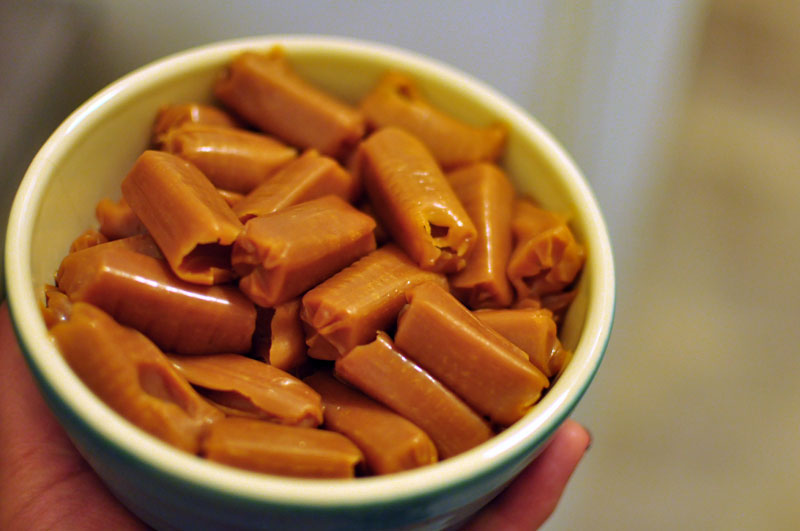 Here is a bowl of caramels. Not picture: unwrapping, fighting to get them out of this bowl (they had slightly melted on my counter, then stuck to each other), my eating two of them, thinking I maybe had too many (I wasn’t going to count, and also PW’s looked smaller,) my using several other options before settling on a “never use for broiling” bowl because I figured it could handle boiling water (it’s oven safe.) 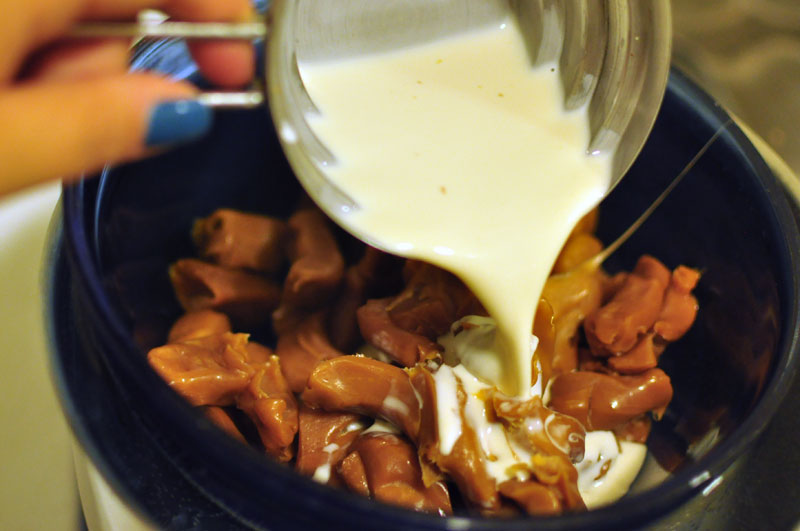 So you take your crazy crazy caramels that are sticky and sticking to all things (bowls, hair, etc.) and pour some evaporated milk over them. Stare at them, assuming they’ll never melt, until they all of the sudden do, then worry they’re too melty. 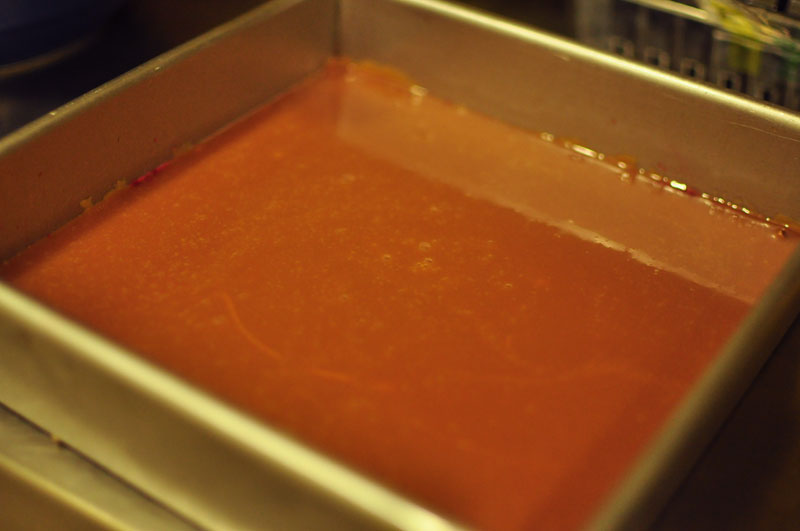 Pour them over the half-cake. This is what will be staring back at you. Resist the urge to just eat them as is. I promise, it gets better. 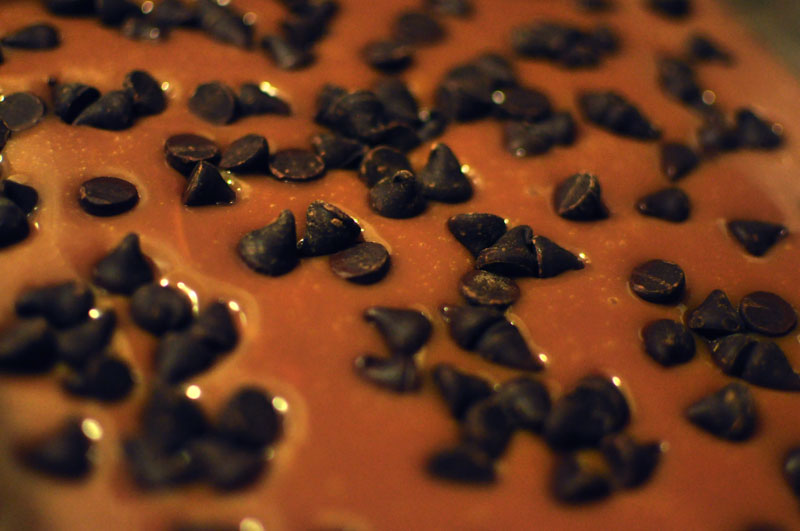 Add some chocolate chips. I added probably half a cup, taking care to make sure there were chips evenly spread across the caramel layer. 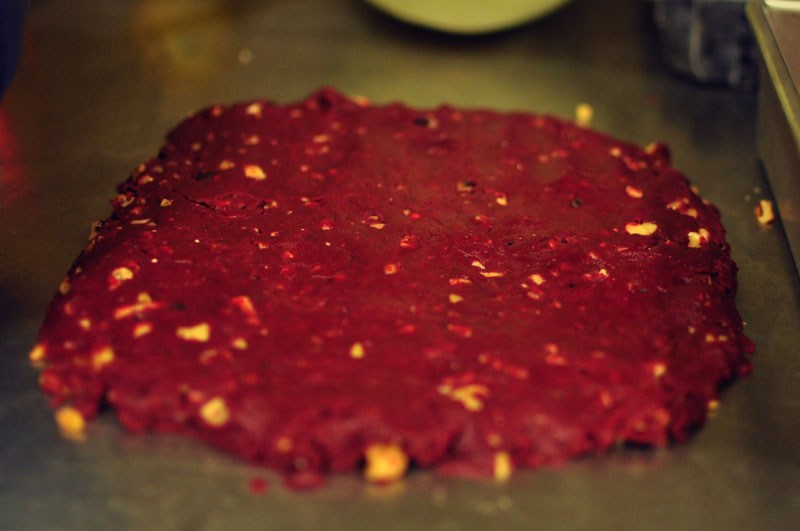 Now, Ree says to lay it out on a surface than use a spatula to transfer. Maybe I used too many nuts, or maybe I didn’t grease well enough, but either way the cake broke apart upon being moved. But it worked out, anyways. Above, note the pre-move. 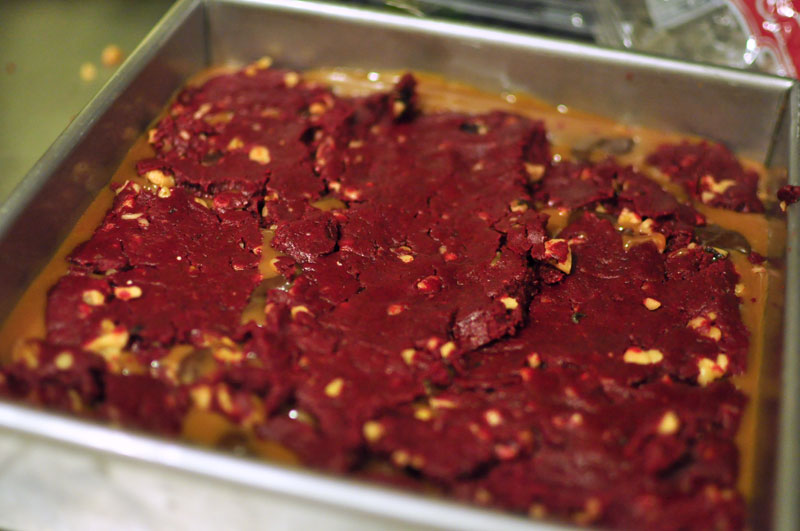 Post-move. It had to be moved in three parts. But, it’s ok – it does expand. Stick that in the oven for about 20 minutes. 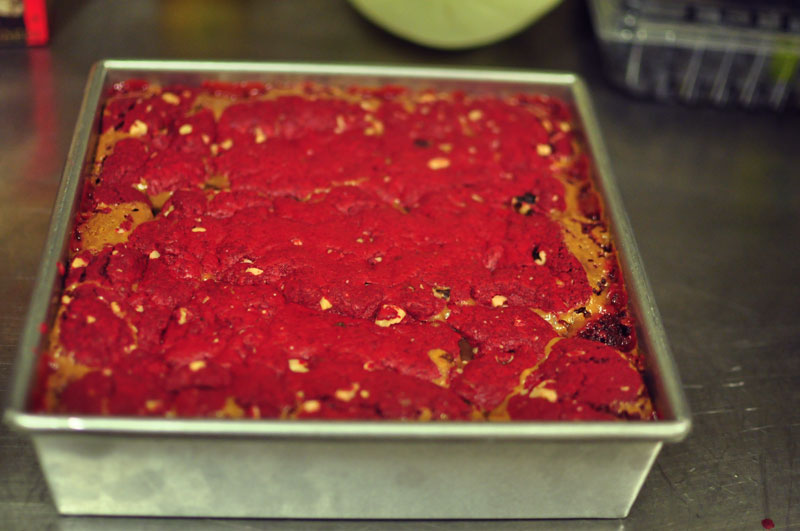 This, my friend, is your completed brownies, just out of the oven. Let cool completely, and then refrigerate it. PW notes not to make these when you really just need a brownie. I mentioned that earlier, didn’t I? So sorry if I did not…but you must wait several hours. (Jeff was annoyed, too.) 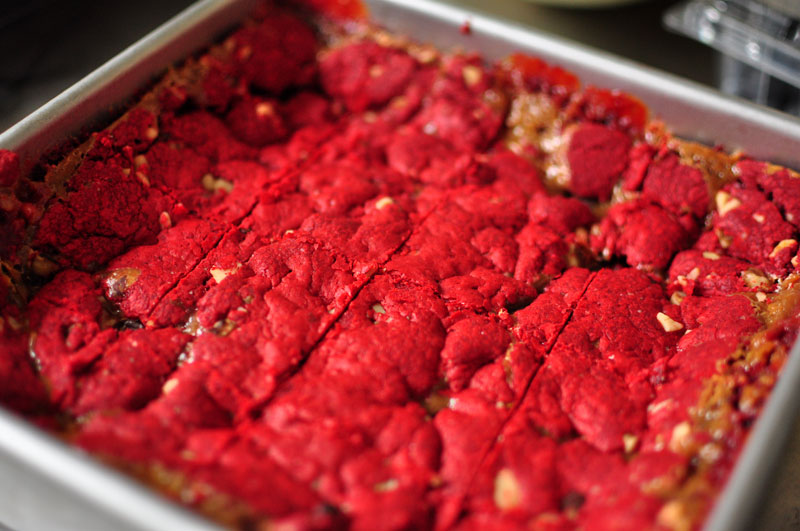 And here are the brownies the next morning, after being refrigerated overnight. 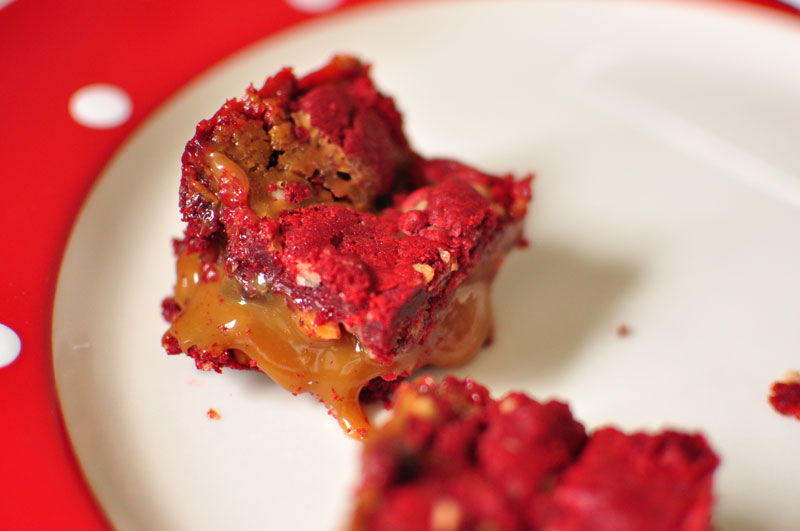 Here are the completed brownie. I must say that the caramels were, in fact, too melty (I used Werther’s classic chewy caramels) and the brownies did not hold up. I also may have used too much caramel (But can you, really, do that?) but they made up in deliciousness what they didn’t have in stability. 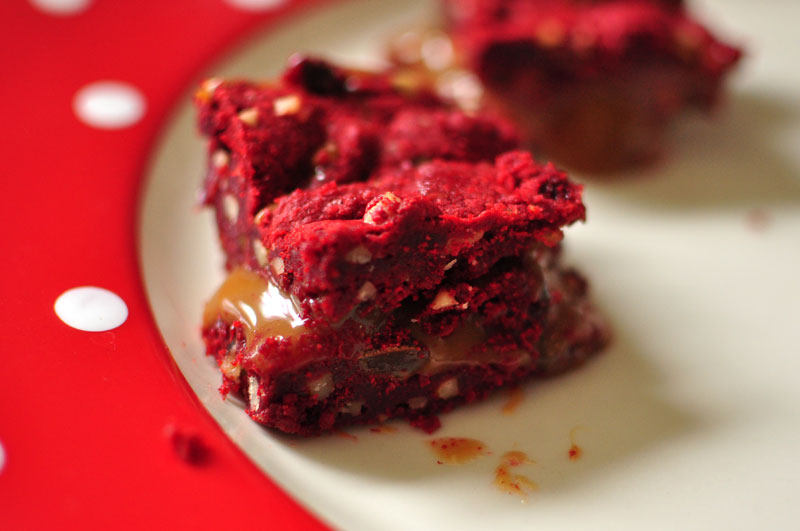 Delicious, delectable brownies. I can’t wait to make them with actual German chocolate, but these are quite a close second.

Who wants to go for a run?