I have to be honest. I kind of cheated on my first bean recipe for this month. The truth is this dish was delicious, but that deliciousness had very little do to do with kidney beans, and honestly not much to do with the original recipe.

I chose a recipe I found on Smitten Kitchen for cauliflower, bean, and feta salad. I admit that I picked the recipe without even reading the blog post. I saw cauliflower, beans, and feta and I decided it must be glorious. When I actually sat down to cook I finally read SK’s post and discovered that she’d been a little underwhelmed by this salad.

Rats! I was unsure how to proceed, but it was a beautiful day and I had cauliflower, beans and feta cheese. I decided to risk it but not to go out of my way to follow the recipe exactly. It called for endive, which I did not have on hand and was too lazy to venture out to whole foods to procure. It also called for various fresh herbs – chives, parsley, rosemary. I had none of these, but I did have leftover cilantro from the cumin tilapia! 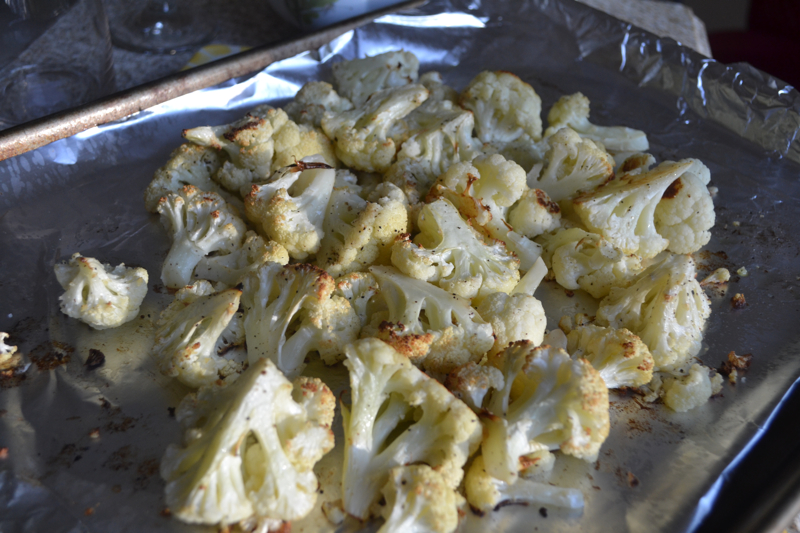 I got started by roasting the cauliflower. 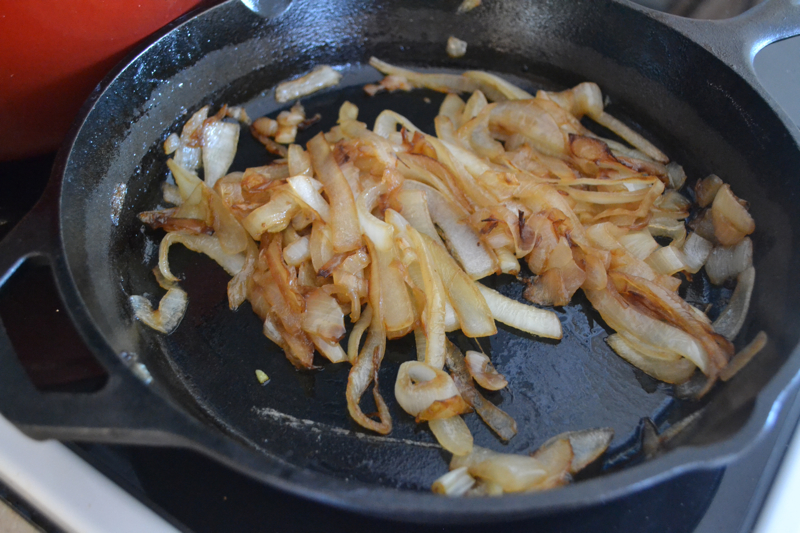 Then, I decided to substitute caramelized onions for the endive. This is what I mean when I say I cheated. Caramelized onions make everything delicious. That’s just a fact. This recipe didn’t stand a chance of being anything other than my favorite thing ever.

The recipe also called for walnuts, which I did not have. Instead I roasted the handful of pine nuts I had on hand.

Time for the main event. 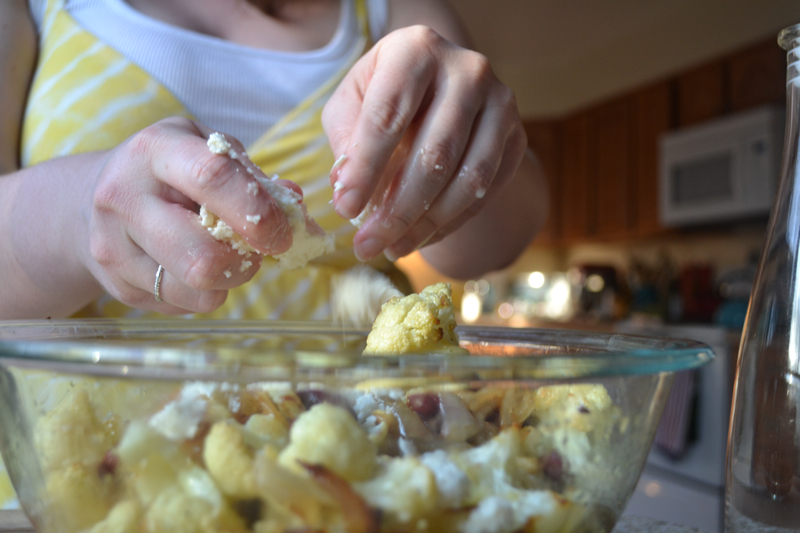 I crumbled about 4 oz of feta cheese into the mixture. (The recipe only called for 3 oz. Oops.) 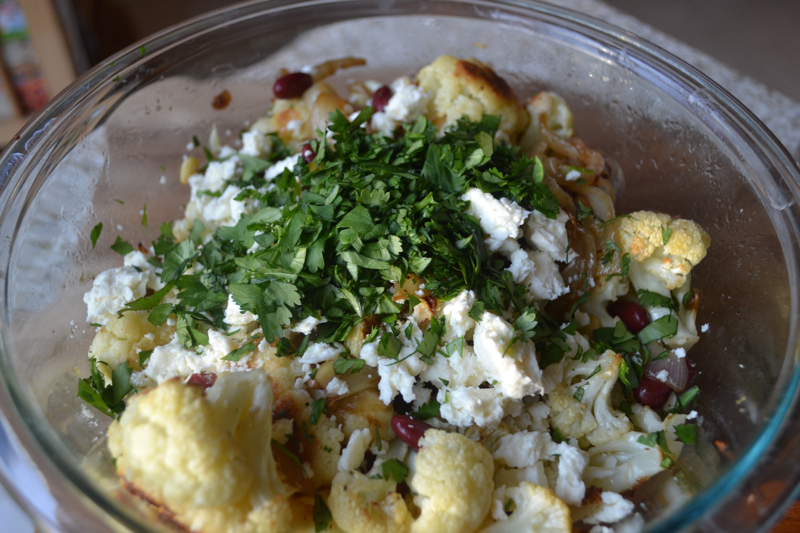 So just to recap: this dish now includes caramelized onions, feta cheese, AND cilantro. Remember what I said about cheating? You know how some people just cover all their food in ketchup and salt? That’s kind of what I do with onions, fresh herbs, and cheese…. 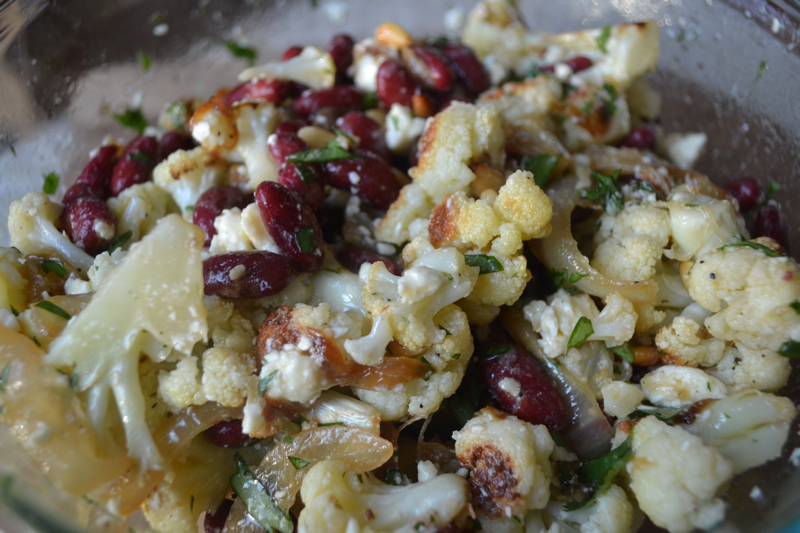 And you mix it all together with a few tablespoons lemon juice, some vinegar (I used rice vinegar but SK called for red wine vinegar), salt and pepper, and a helluva lot of olive oil. Honestly it was just too much olive oil. The original recipe called for 1/3 cup rosemary infused olive oil. I nixed the rosemary, but I did not account for the fact that my addition of caramelized onions amounted to one big (scrumptious) oily mess. In hindsight, I should have nixed the oil all together, and it’s hard to imagine how even the original recipe would need a whole 1/3 cup. Definitely consider cutting this down if you’re planning to try the recipe yourself. 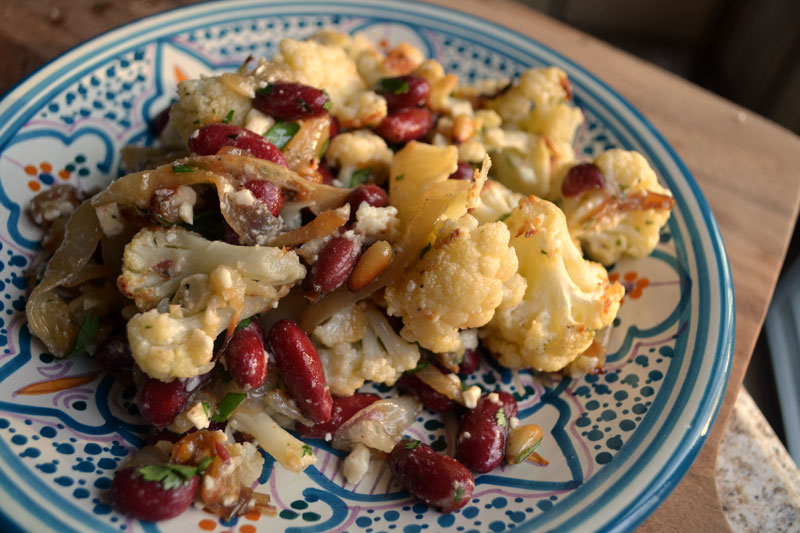 Like most things I make for the blog, this salad lasted less than 2 hours in my house. I ate one serving directly off this plate, then mixed it with some spinach salad and let the oily goodness be my salad dressing. I plan to make this again all spring and summer. It was perfect for eating on the back porch with a glass of wine and watching the sunset.