Posted on December 22 2011 by fratellospirito

Today we are going to talk about the brown stuff. Now for those that know me, I have a huge affinity towards brown liquor. My favorite type of drink on the planet is a single malt Scotch. Now many I’m sure would guess that this would lead me to write my first review about liquor with Scotch in mind. But I really don’t like to be predictable. So instead I am going to talk about my other favorite brown alcohol of choice and that is bourbon. Specifically today I want to talk about a bourbon I discovered recently that I really enjoyed: Bulleit Bourbon: Kentucky Frontier Whiskey. 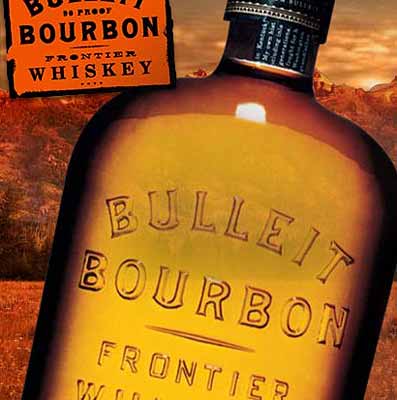 Now I have to be honest. I had never tried this bourbon before and was recently in the liquor store looking at the aisle feeling a bit intimidated. While I can contend to know the differences in taste between one single malt scotch and another, bourbon is a bit more mysterious to me. I have always liked it, but my thoughts always pointed to the fact, that if I could have scotch or bourbon, I would 9 times out of 10 choose scotch. But I wanted to try something different and the price seemed right, so I said what the hell and went for it.

A few quick things to know about this bourbon.  First off, it is made in Kentucky. This is very important, because when you are dealing with Scotch, Bourbon, or Moonshine the water that helps to produce it creates savory or unsavory effects on the final product. The reason so many distilleries in Scotland and in the United States haven’t moved in centuries is because the makers of the liquor don’t want to go any further from their traditional water source than possible. Any liquor enthusiast or maker will tell you that the water is one of the most important components. The reason for this is that most of these distilleries are built at the bottom of rivers and streams. Their water travels through the heart of their surroundings, through rock, soil, and forests. The minerals the water picks up along the way give the taste of bourbon so much complexity. This particular bourbon’s water travels through a large set of the limestone formations in Kentucky, giving it a wonderful earthiness that is often missed in a great deal of bourbons that use more filtered water.

A second thing to remember about this bourbon is that it is made in small batches. Many think that with alcohol just like with cooking if you simply double the ingredients you get double the yield with the same quality. I think both chefs and liquor craftsman would disagree. This bourbon’s recipe was created in the late 1800’s in small batches and the family that continues to run the distillery today keeps it that way. This allows every batch to be cared for and looked after until it is just right and put in the bottle.

When you pour a glass from its well crafted bottle, you will pick up on the aroma immediately. Now for those of you who aren’t big fans of whiskey or scotch, this has a similar heft, so be warned. But if you love that heft, go ahead and breath it in. Before you take a drink, take a moment and put a few drops of water into the glass. This opens up the bourbon even more and allows for the subtle tastes to amp up a bit. As you begin to drink, notice the initial hints of vanilla that wrap around your tongue. This is followed shortly after by the wonderful earthiness of the limestone of Kentucky. This gives you a very “out in the woods” sensation. The bourbon finishes off wonderfully with the spiciness offered up by the rye that helped produce it. It goes down wonderfully with its hints of cinnamon and bay leaves. Just the thing for a cold night next to the lit up Christmas tree!