Jasmine is a friend from work that shares my mutual love for food, wine, and all things funny. As such, I asked her if she’d like to guest blog once in a while. Here’s her first post – hope you enjoy it as much as I did!

I had total delusions of grandeur when Jennie first asked me to share my very first guest post on GMS but as with so many of my life’s plans, my motivation was very quickly and suddenly diminished by a crippling Sunday morning hangover. I was nauseous, debilitated and exhausted – and the breakfast pizza and pan-roasted Brussels sprouts from Little Dom’s (Los Feliz little sister of the equally fantastic Dominick’s) were a totally unfeasible 15-minute car ride away.

But then I had a brain wave. How hard can it be, *really*, to make amazing roasted Brussels sprouts at home?* In between waves of nausea and Gatorade, I plotted evilly and created the following:

1. Trim and halve your Brussels sprouts. (I’ve also belatedly realized that the abbreviation for them is “BS”, which while hilarious, is distracting. I will refer to them as “the sprouts” moving forward). This may seem unnecessary but sometimes the outer leaves are a bit tough/wonky, as is the base. 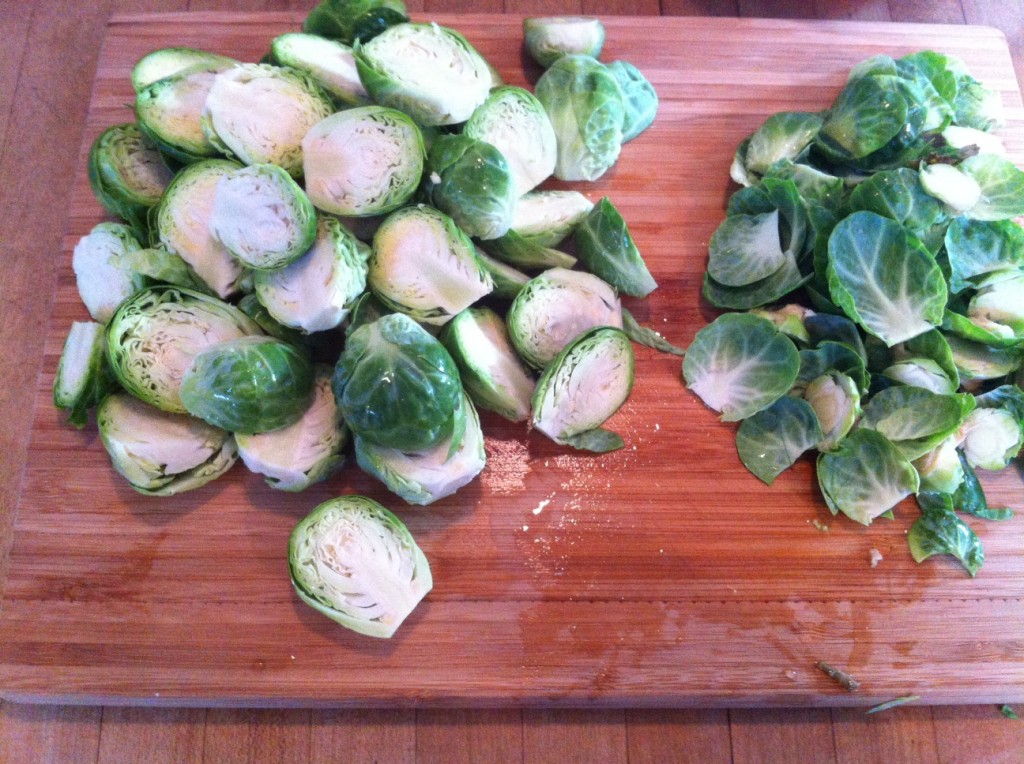 2. Heat the olive oil (or EVOO, according to my best friend Rachael…gross) in a large heavy skillet over medium heat and chuck in either your diced onions or shallots. Stir until they’re softened.

3. Add the sprouts to the skillet, trying as much as possible to keep them flat side down with direct contact with the skillet. The goal here is to get them as browned as possible and start to get them caramelizing. Cook them for about 5-7 minutes, stirring very occasionally. 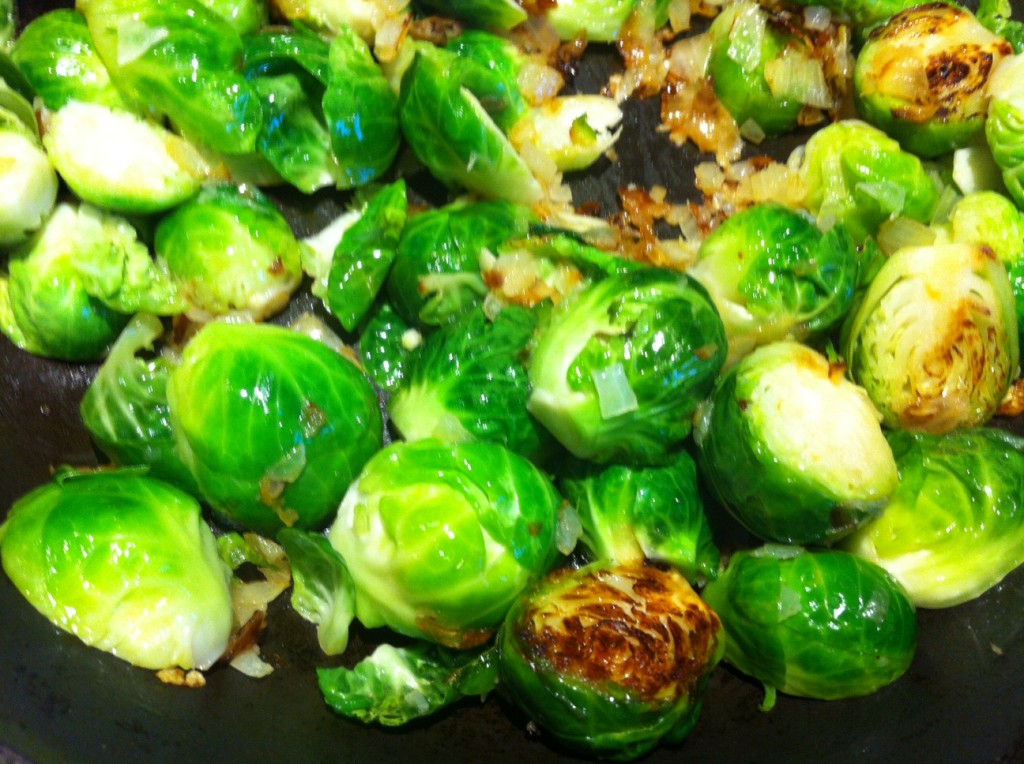 4. When you’ve got a decent amount of browning (and color = flavor, if Mr. Ramsay is to be believed), reduce the heat to low and season with salt and pepper. At this point, add your raisins and butter and continue cooking for another 3 minutes or so, until the butter melts and creates a thickish sauce at the bottom of the pan. 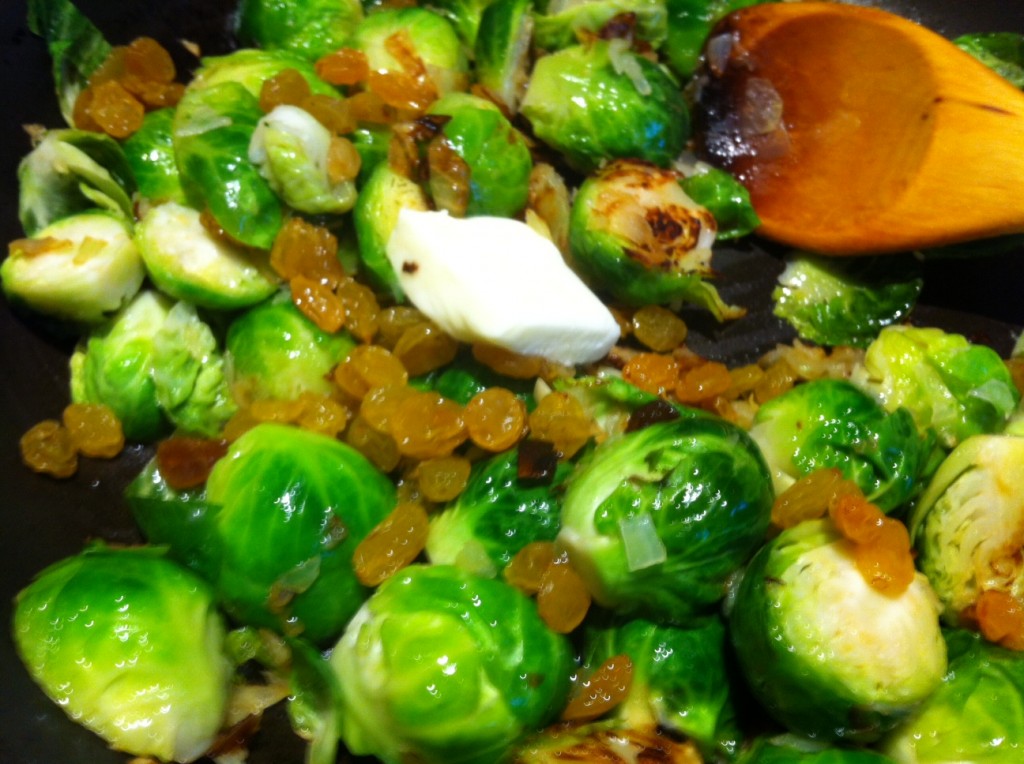 5. Add the chicken broth to the skillet, scraping up any browned bits from the bottom of the pan. For culinary nerds out there, you were correct – this *is* the deglazing portion of today’s lesson. Increase heat and bring to a boil, and reduce it down to a simmer until the broth evaporates. Take the whole pan off the heat and stir in the apple cider vinegar. 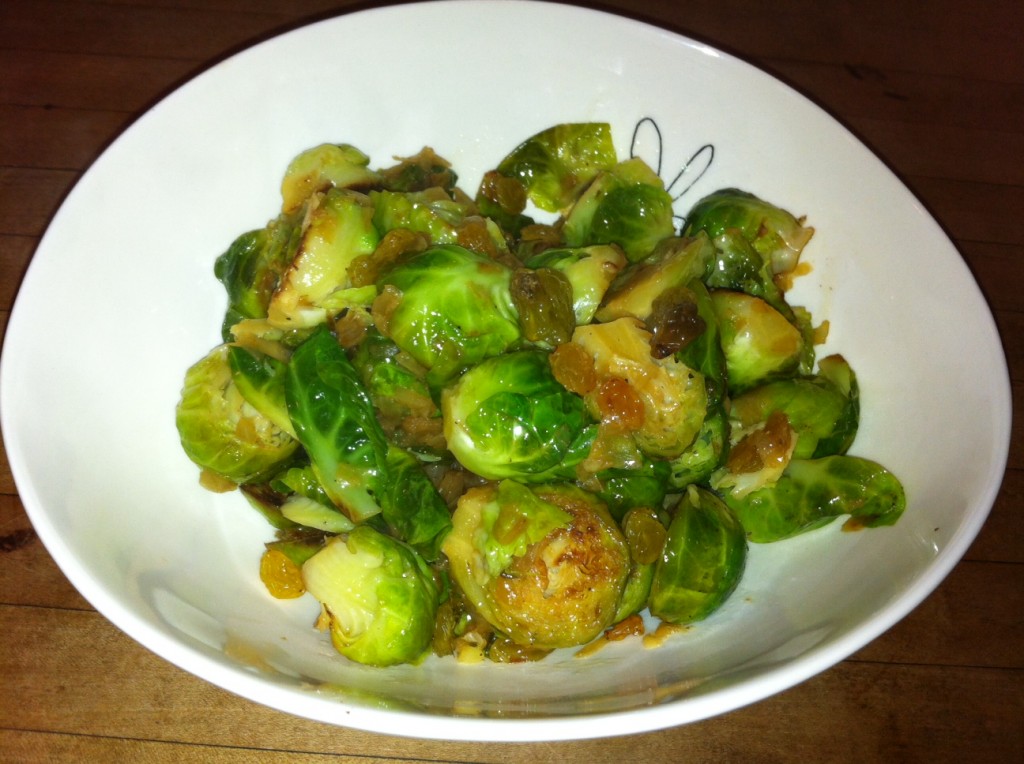 There’s pretty much an unlimited amount of variation with the classic roasted Brussels sprouts recipe. I’m well aware that this is a vegetarian (gasp, horror, etc.) one but an obvious carnivorous addition here is bacon/pancetta. You can certainly get more creative and make Brussels sprouts slaw, or try using honeyed pecans or other textured ingredients.

*Disclaimer: Fully aware that most people don’t actually keep a bag of Brussels sprouts in their kitchens but they’re delicious, especially in season and from your local farmer’s market. Also fully aware that Brussels sprouts are now a trendy/posh “side” veg option at nice restaurants. I happen to have enjoyed them since I found out what butter was.