It’s been a light cooking couple of weeks for GMS because our main kitchen has been undergoing a major renovation!

It all started when I noticed moisture in our Tupperware cabinet (which everyone has, right? Two shelves completely dedicated to glass jars and plastic containers…right?!) I called our plumber (who is named Mario, we cannot let that go unknown) and he came over to inspect. Well, a little moisture turned into an entire kitchen renovation…I’ll show you what I mean… 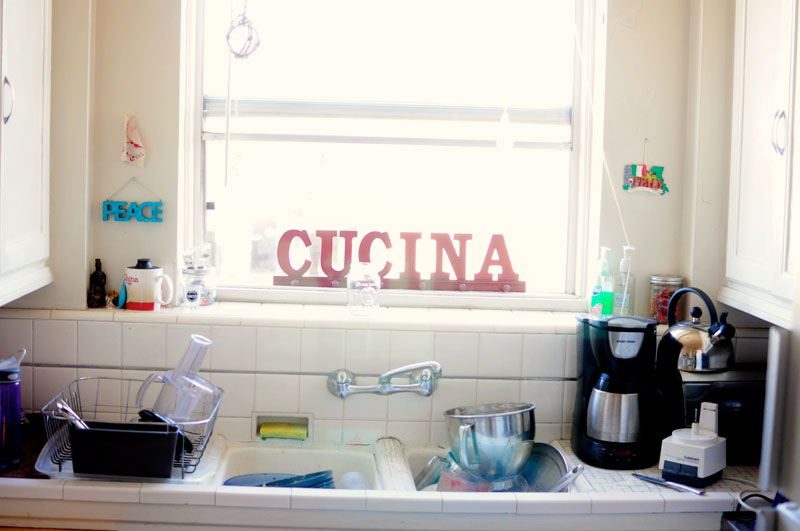 So, here’s the kitchen in it’s original state. Pardon the mess…and the dishes. When I took that photo, I never intended to share it with you – but alas, I didn’t get a “before” shot because when Mario came, I didn’t know it was going to be such a huge demo! Also, I guess “original” captures our lives pretty well anyways…who doesn’t have dishes 90 percent of the time? 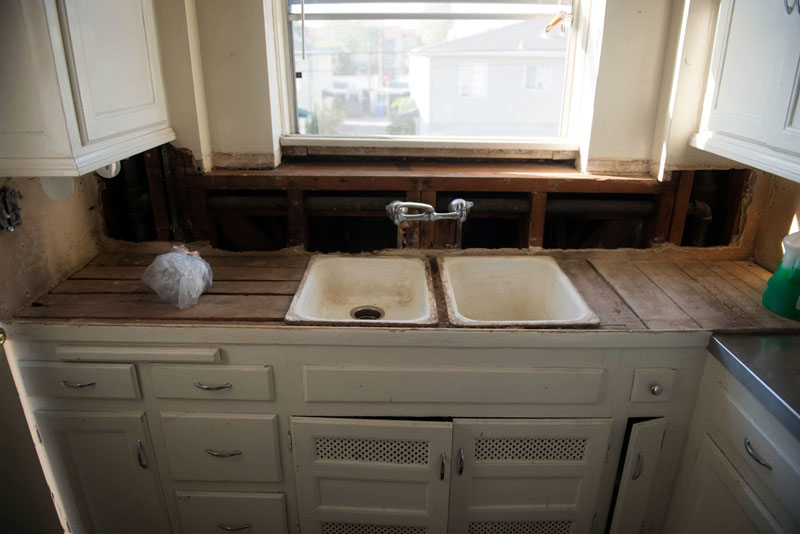 This is after Day 1. They took out all the tile that had been there for over 60 years, to reveal a pipe that was sweating (Mario says it was going to burst at some point, so it’s good I noticed!) 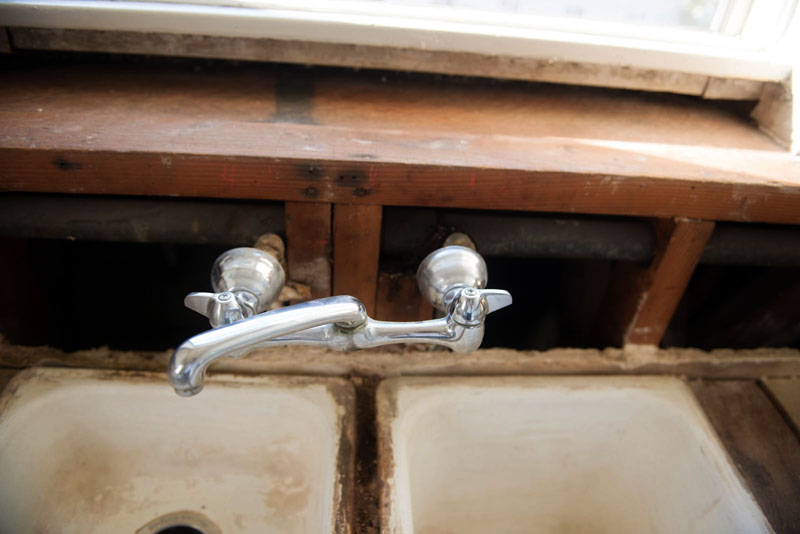 Here’s our old fixture – the faucet came out of the wall instead of from the sink. Also, notice how the sink basins were two separate sinks. This made them very hard to clean, plus they were quite old, so that didn’t help much. 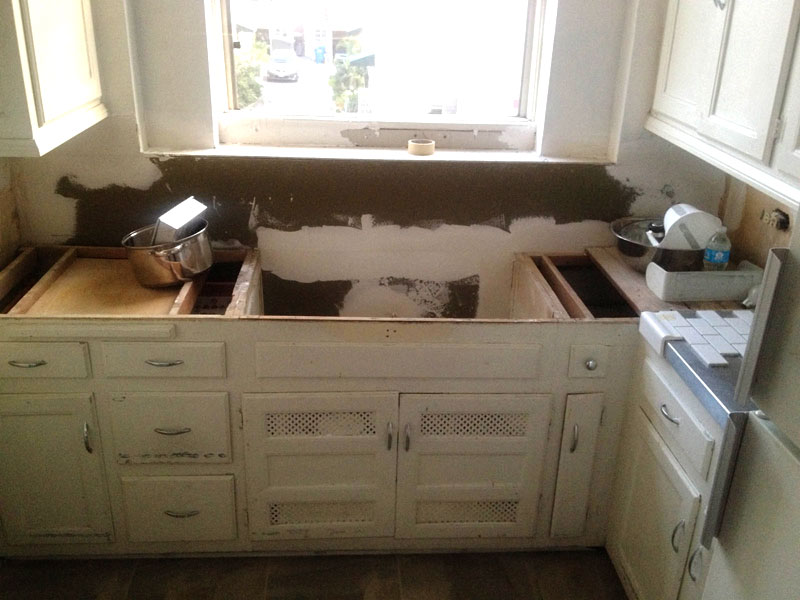 After Day 2, they had ripped even more stuff out, and we were without a sink for a day. They also started patching all the walls and ceiling so they could paint the kitchen. 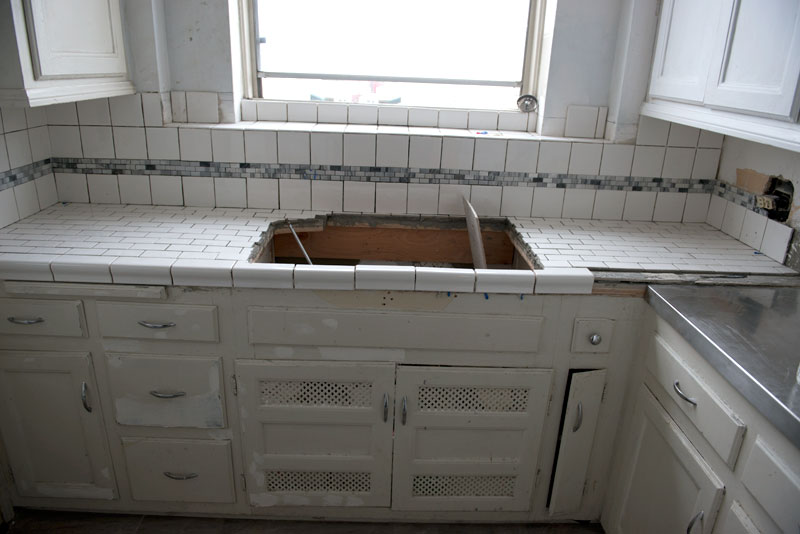 Day 3 was plumbing – after they ripped everything out, there was some behind-the-scenes work that happened (ie, replacing the pipe that was leaking, and all the pipes for the sink.) This involved going into our attic – which I didn’t even know we had – and pulling out the pipe. After Day 4, this is what our kitchen looked like – tile placed, but no sink! 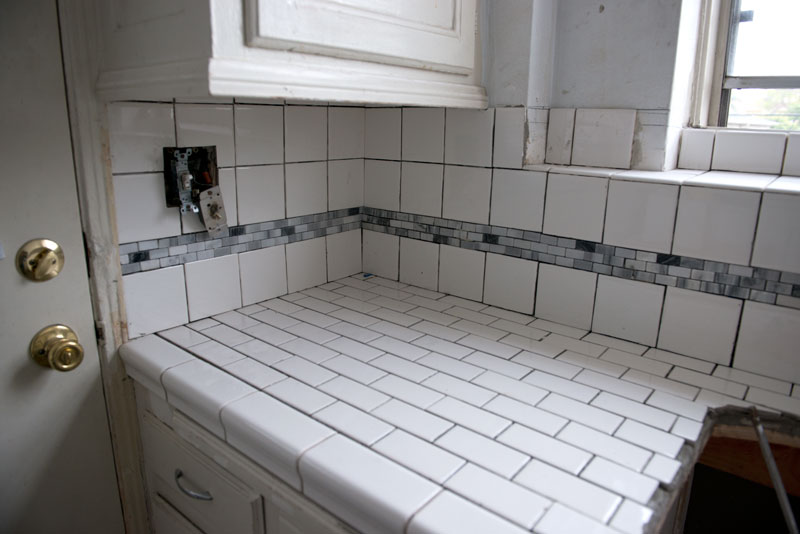 Then Mario and his crew put new tile in and they painted the kitchen white (it used to be an offwhite color.)

I’m happy to report after Day 5 (also known as Tuesday) this is what the kitchen looks like now – we’re just waiting for Mario to seal the grout so we can really get in there and use it! Hopefully by this weekend we’ll have a fully functioning kitchen again. Only about two weeks without a kitchen, and I’m going whatever the opposite of stir crazy is. 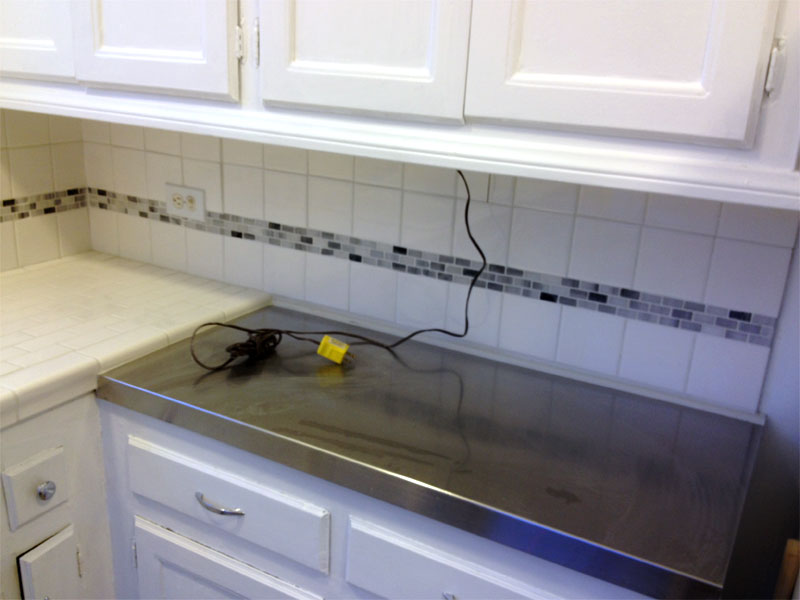 It took the crew 5 days to do the kitchen (and paint the bathroom, too!) and we are very excited for all their hard work. Having a new GMS kitchen to work in will be lovely – and a new backsplash for our photographs doesn’t hurt, either!

Have you ever had a renovation in your house or kitchen? Did it leave white dust all over like it did ours? Tell us!