Posted on July 5 2012 by fratellospirito 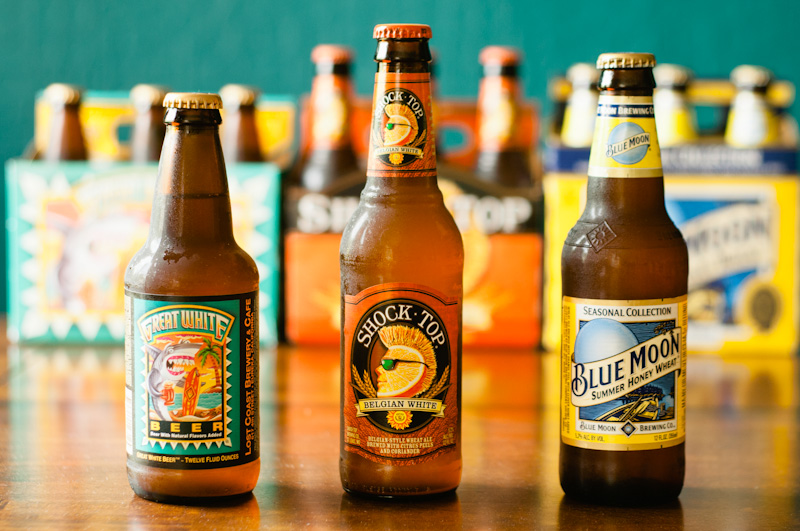 Summer is here! It’s that wonderful time of year where the weather is warm, the barbeques are plentiful, and the environment is ripe for relaxing on a hot Saturday afternoon while enjoying a nice cold beer. Now depending on the situation, there are several great beers that I know and love that I can always go to as a nice standby for these situations. You have your Sam Adams Summer Ale or your Stella Artois. If you feel like going fully authentic go for the Corona with a lime, but make sure you have limes! But as the summer came rushing upon me this year I realized very quickly that I have gone towards these standbys a little too often.

Don’t get me wrong, I love all the aforementioned beers and the relief they provide on a hot summer day, but I wanted to challenge myself with something a little different this time. With this in mind I wanted to find three new beers that I would buy, taste, and write about purely on recommendations from our lovely friends down at the local Bev-Mo. I like to think I have a well-rounded palette when it comes to beer, wine, and spirits, but I sometimes forget as we all do that there is always something new to try and we shouldn’t be using the brands we love as a crutch.

The scene was simple. I walked into the shop and told the nearest attendant that I was looking for three summer beers that were light, fun, and would refresh me. He asked what I typically drank and I gave him a short run down. My only other stipulation was that he give me something that was readily accessible to as many people as possible. I told him that I would wait at the front desk as I wanted to simply buy what he recommended so I didn’t think about it too much. After a few minutes he plopped three six packs on the counter. The first was a Blue Moon Seasonal Beer, the second a Shock Top varietal, and the third a northern California beer with a very muscular shark on it. Being that I had never tried any of these beers, my stipulations on selection were met and this is what I thought of them.

All cards on the table I have to say upfront that I hate Blue Moon. When it is on the menu, I typically stay as far away from it as possible. I don’t know where this animosity came from, but I have never been able to stomach the taste of their all year round varietals. So much so that when the attendant put this six pack on the table, I nearly vetoed. However, had I asked for something else I would have missed out on a pleasant surprise. This was the most accessible Blue Moon beer that I have ever had. While I wouldn’t put it in the Top 10 of beers I have ever tried, for a light summer beer it did hit the spot. This wheat beer has a wonderful golden color and starts off with intense citrus notes as the beer hits your tongue. The citrus lingers only momentarily and is replaced by the taste of honey as the beer goes down. It has a great sweetness and is very refreshing.

I had never had a Shock Top beer before trying this one. Typically I stay away from beer that advertises you drink it only at the end of the world.  There has to be a reason right? Anyway this beer, also a wheat base, is a different take on a white beer. When you pour it into the glass you see the trademark color of a white beer and the cloudiness that typically defines them, but the difference in my opinion comes with the taste. With Belgian style whites I typically get a strong taste of herbs and spices before anything else, but with this one, I got more citrus and zest then was expected. It was a great surprise. My only major complaint about the beer is that the initial burst almost over powers everything, leaving the rest of the experience a bit flat. While it tastes great going down, it has a tangy aftertaste that I don’t particularly love. That being said it is very easy to drink and would probably go great with some burgers.

This beer seems a little cliché when you pick it up. The label has one of the most steroid induced sharks I have ever seen illustrated dead center. But hey, it looked quirky, so I said what the heck! This northern California Wheat beer was anything but quirky after taking a taste of it. It truthfully was more like the traditional Belgian White beer that I was accustomed too. It had a wonderful spiciness to it from the first sip and its after taste was simple and clean. In terms of a beer you could probably have too many for you own good, this was a prime candidate. Very refreshing and incredibly complex in its simplicity. I will definitely be stocking this one in my fridge a few times this summer.

Remember folks, alcohol is about responsible experimentation – developing a palette of likes and don’t likes. But you always have to leave room to be surprised. So get out there and try something new this summer!