Bouillabaisse: a cooking adventure in the windy city.

Posted on November 8 2011 by sorellacaienna

I’m the actual sorella of Jennie. When she asked me to guest post on the blog, I was pretty excited, for the following reasons:

1. Jennie and Corelyn’s blog is pretty awesome, and I was getting jealous.

She told me I could post about anything, which meant it was time to get creative.

I thought I really needed to pull off something I’d never tried before.

I believe in the power of teetering on the brink of disaster.

I immediately called my friend Ky, who’s my cooking-partner-in-crime, and brainstormed about what we could cook that would be both delicious and also something that wasn’t in our usual repertoire.

When someone asks you to guest blog on their cooking site, you simply don’t give them something easy.

There would be no spaghetti on this day.

After some deliberation, we decided on bouillabaisse. It’s something we’ve been wanting to tackle for a long time, due to the following considerations:

1. The best recipe is Julia Childs. You should probably watch this for inspiration.

2. It involved going to the fish market. Or in our case, two fish markets. Ky and I love nothing more than a specialty market.

3. We needed a fish head. In general, we like to find ourselves in situations where we’re running around town, looking for things that you can’t find at the regular supermarket.

With these three things in mind, we took off on Sunday afternoon to our favorite two fish markets in Chicago (Dirk’s and New England Seafood Company, if you were wondering).

At Dirk’s, I asked if they had any fish heads I could possibly buy from them. The fish monger proceeded to tell me he had a grouper, which would be ideal, and then chopped its head off, dealt with the gills, and told us to be careful of the gills.

“They’re kind of toxic. I mean, it won’t kill you if you touch them, but you probably want to avoid it.”

Then he told us the head/bones were on the house. 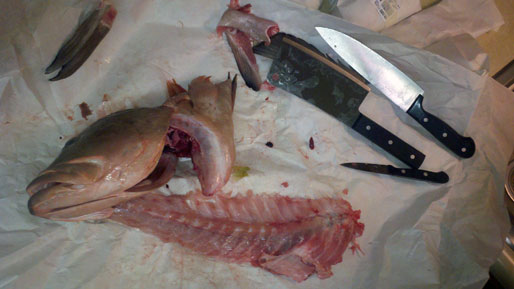 Between the two markets, we ended up with hake, whitefish, bluefish, cod, mussels, and littleneck clams. You need about a pound of each to make enough bouillabaisse for six or so people.

Now, despite the fact that I told you we were up to something challenging (which we were), I am here to tell you that it is actually not all that difficult to produce a delicious, French-y fish stew.

Here are all the items we used, aside from the fish: 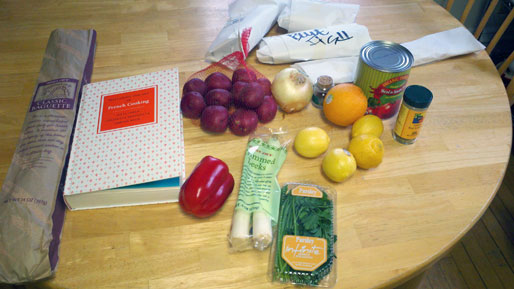 The trick to all of this is actually concentrating on your fish stock, which is what we used the fish head/skeleton for.

The base of the stock, according to Julia, is a combination of leeks, onions, and garlic. 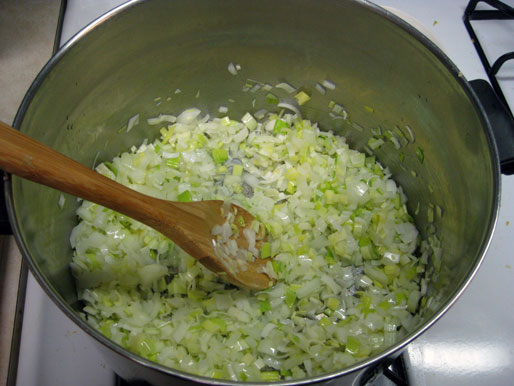 Once those have sauteed for awhile, you throw in the tomatoes. You can chop them up, or you can use diced. We used 1.5 cups of diced, since tomatoes aren’t in season in Chicago anymore.

Add the herbs. Julia says to use 5 parsley sprigs, a pinch of dried thyme (or basil, but we think dried basil is weird), and 1/8 teaspoon of dried fennel.

Ky and I don’t believe in an 1/8 teaspoon of anything, so we skipped the fennel.

Also, throw in two big pinches of saffron. And some orange peel. You might be skeptical of the orange peel (we were), but it’s delicious. Trust us. 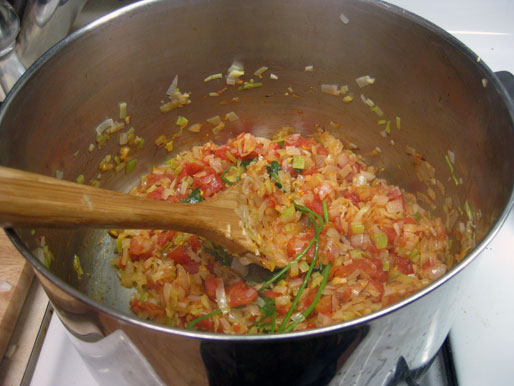 After you’ve let those items saute for about five minutes, add 2.5 quarts of water, and the fish head/skeleton. 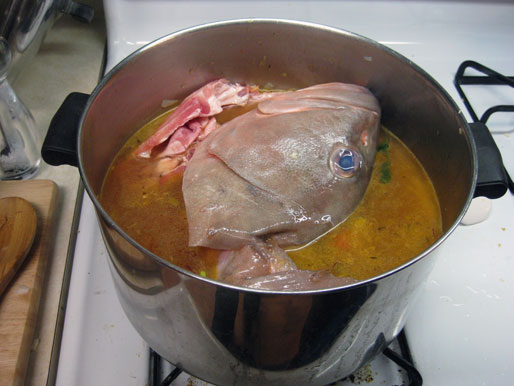 The fish will be looking at you.

It will be weird.

You have fifty minutes to get over this, because that’s how long you’ll be boiling your stock.

In the meantime, prep your fish. This means rinsing your fishes, and letting your shellfish hang out in some cold water. We added some cornstarch to the water, which the shellfish ingested, and then spit out, along with a bunch of grit.

Once the mussels and clams are finished spitting all over the place, scrub them so they’re clean. 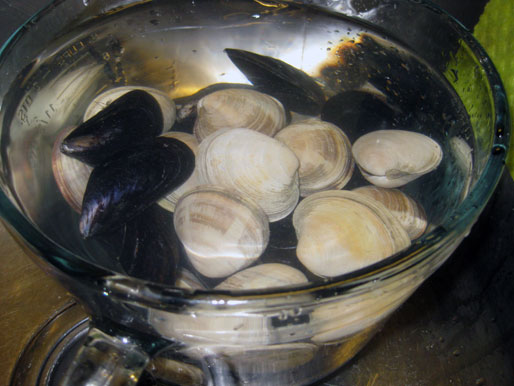 Call some friends because you realize you’re going to have way too much bouillabaisse for three people.

Once the fish stock has boiled for about fifty minutes, press it through a sieve to remove all the solids. 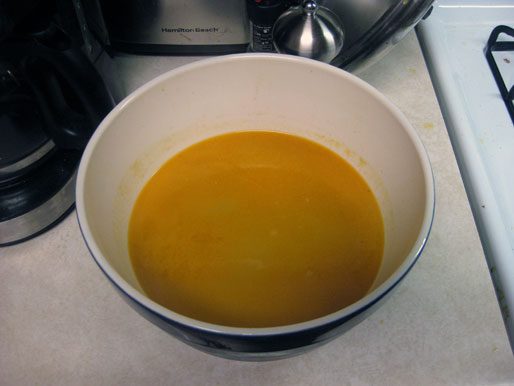 Get rid of the fish head, which by this time has disintegrated and is really, really gross.

Back to the stew.

Put the stock back into your pot, and bring it back to a boil. You might have to add some water–the recipe says you should have 2.5 quarts of stock, but we had more like 2 quarts.

We also added the rest of our canned tomatoes, because we’ve never added extra tomatoes and regretted it.

Start another clean pot of water in which to boil some potatoes. This is a delicious side, suggested by Julia.

Once the stock is at a rolling boil, throw in any small, gelatinous fish you might have. We didn’t actually have any of those, so we threw in everything at once and let it cook for around seven minutes. 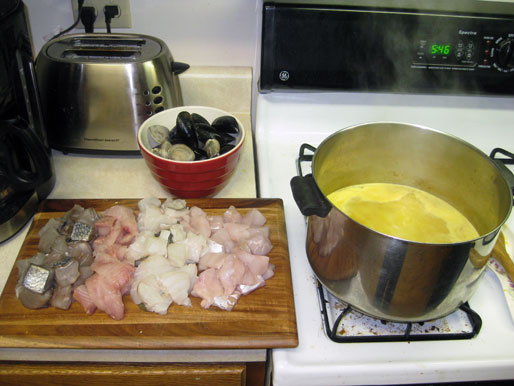 While that’s happening, throw some baguette rounds in the oven to broil. 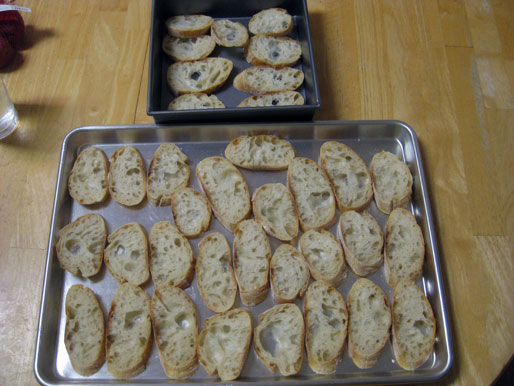 This recipe has a lot of moving parts. It’s a good project for more than one person.

While one person is making sure that the fish is cooking properly and the toast rounds aren’t burning, the other person should be making the rouille, which is a delicious red pepper/potato/spicy/olive oil sauce.  Here’s what’s in it:

While Julia says you can use a mortar and pestle to complete this task, we pulled out the food processor, and combined it all fairly quickly. We set that aside, and got to the business of putting the soup together.Pull out a big platter (I recommend one with sides, to catch all the broth) and layer toast rounds on the bottom.

Ladle out the fish onto the top of the toast rounds, and then ladle the broth on top of that. 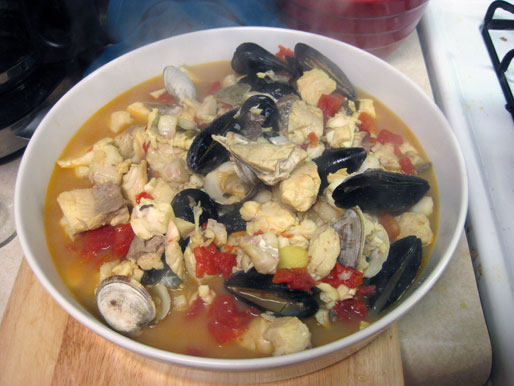 This is served with the potatoes and the rouille on the side. Below is how we put together a bowl. 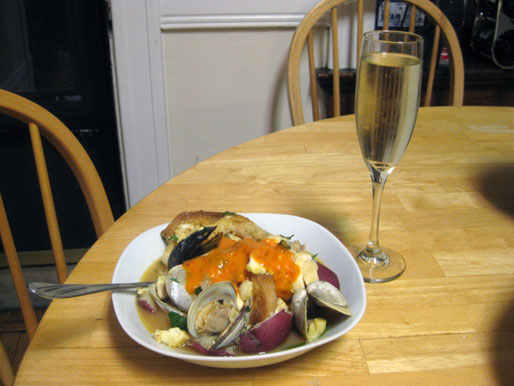 We drank this with prosecco, because we felt like celebrating, and enjoyed every last bite. It was delicious, and contending with a giant fish head was definitely worth it to end our weekend with this comforting, perfect bouillabaisse.
We like to think Julia would have been proud.
And even not, we were.
Here’s the recipe- but the trick is, mix it up. Make it your own. We’re not advocates over here of dictating what will work and what won’t.
That would ruin all the fun. Happy cooking, chickadees! 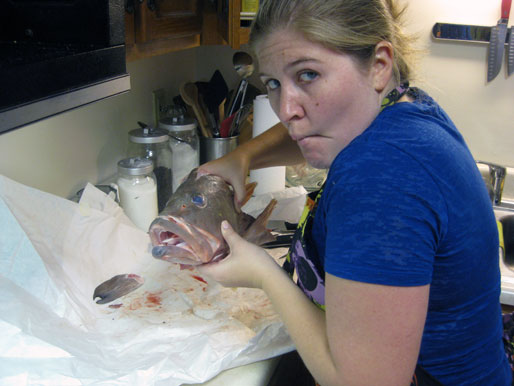